Hellow Bend, So Nice To Meet You

Okay first things first, I had a killer time in Bend the other weekend. I realize an entire week has passed since the trip, but the memories are still pressed against my foreskin and I'm reeling in delight. I assure you, it was a good time indeed. Wait.. what? I meant to say forehead, obviously. I apologize to those of you who hightailed it outta here, and I commend those of you who stayed. Anyways.. we drove over Saturday afternoon, rented our hotel room, and then had several hours to kill before the concert. We decided (after much smart phone internet surfing) to head over to the Deschutes Brewery to take part in their brewery tour. Glad we did that, it was awesome. Great beer, great tour, great fun.
We followed up with dinner at the Deschutes Bar & Grill and ate some damn good pulled pork sandwiches and took part in the revelry as the Oregon Ducks continued their undefeated run at college football. During my breaking of the seal ceremony in the men's bathroom, I encountered the only California fan in the bar that night. He was ranting about 3rd down conversions and poor defense and harping on the Ducks in a big way as I stood next to him relieving my Deschutes Hop Trip beers. I'm guessing he was pretty drunk to assume that I would share in his commentary, since we were at a bar located in a town in central Oregon, hundreds of miles away from anything resembling California. I listened to him plaster his obscenities to the ceramic-tiled wall for a minute before telling him all about some secret shit that Buzz Aldrin did during the moon landing. I can't even remember everything I said now, but some of it entailed Buzz getting buzzed on the moon and murders taking place. I dunno, I was pretty drunk too.

The concert was phenomenal, beyond what I had expected. Floater is truly an amazing band, especially live, especially acoustic. A few blogs ago I wrote up a list of my 15 favorite albums and since then I've realized there are so many more I didn't mention. If you don't know Floater, I suggest that you acquire their acoustic album, it's impossible not to love: 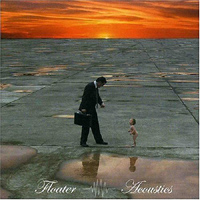 Another album/band that was introduced to me (thanks Erynn!) during the Bend trip is called I And Love And You by The Avett Brothers. Whoa, this album is HOT! I can't stop listening to it, it's the best thing to enter my ears since q-tips. You gotta check it out: 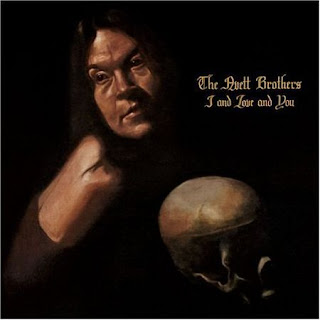 Alright, now I have to do a call-back. I wrote a blog awhile ago about windshield wiper weirdos. If you didn't catch it here's the link: BLOG LINK. I have to add an addendum now after riding in a car with Tyler. On the way to & fro it rained off & on which means the driver (Tyler) had to use his wipers. Well, during the times it was merely a drizzle he had his wipers on full throttle. Squeak squeak, swoosh swoosh! His dry windshield was getting rubbed by rubber blades eager to do some serious water wiping, but sadly THERE WAS NO WATER! Haha, it took a few jokes from the passengers to get the wipers flicked into intermittent mode. Since then, I've noticed dozens of other people doing the same thing: their wipers will be on at full blast when their windshield is damn near dry. People are indeed interesting creatures, blog worthy even. I wonder if this excessive windshield wiper disorder rolls over into other aspects of their lives? For example: I picture Tyler brushing his teeth for so long the bristles begin falling out of the brush, or stirring the cream/sugar into his coffee for so long the cup cracks, or masturbating long after the porn has stopped and him awkwardly "finishing" during the scene where Bambi's mother gets shot by a hunter. "We made it... we made it, mother! We...  mother? MOTHER WHERE ARE YOU??" Haha, mother can't be with you anymore, Tyler, you windshield wiper weirdo.

It snowed here in Salem, Oregon, and I still had to drive through neighborhoods dumping garbage cans. Yes, just because the weather sucks doesn't mean I get to stay home. During my round-abouts I discovered a wonderful reason why leaving your windshield wipers in the ON position is not a great idea: 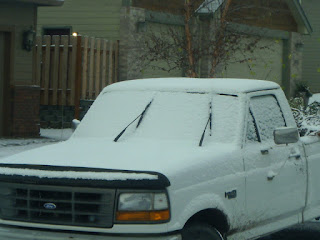 As you see here this fellah has sorta kinda fucked himself. The night before the ice and snow came I'm sure the last thing on his mind was turning his wipers off before exiting his truck, sad day for him. Now if he decides to go somewhere he has to scrape all that ice and snow away from his wiper blades and windshield before turning the ignition, otherwise he takes the chance of burning up his wiper motor. Had he the presence of mind to turn the wipers off before exiting his truck, he simply could have fired up his truck, turned the heater/defrost on and let the internal warmth take care of all that jazz while he sat inside his warm house reading the morning paper and drinking a hot cup of coffee. I win, fuckers! Turn your wipers off before getting out of your cars, it makes sense now. And I have other things to blog about...
Posted by solarjinx at 6:35 PM