The Earth Is Your Oyster

My last post was terrible. I hate it and I apologize for being such a shit, but I'm going to leave it up because that's what this blog is all about. For those of you who read me, you know I don't really hide behind anything (i.e. my domain name). I am sometimes harshly opinionated, often drunk, and always as honest as I can be with the stuff I write, even if it's brutal. That last entry was no exception. Lately I've felt upset with myself and bored and confused and feel like I'm letting go of huge part of who I am. It takes a lot to excite me and I lashed out at internet strangers in general because I was reading blog pages and it felt to me that people don't really have anything to say anymore. I bet I spent nearly an hour perusing various blog sites, reading everything from food related to online dating to cultural events. Honestly, not a single page sucked me in. Everything felt fluffy and I certainly wasn't in a fluffy mood, so I lashed out and pitched a fit and two of you answered back (which surprised the hell out of me). I appreciate those comments and it strikes me funny how for the past year it's been dead quiet, not a peep, but as soon as I write a lambasting entry and "call you fuckers out" (that's how I worded it before editing) I receive two comments. Haha, that fascinates me. Maybe you are bored too? Maybe something I said made a little sense? After re-reading I do realize my logic was indeed flawed, but the overall point of humans being bored and trapped and surrounded by situations and people that further disenfranchise their spirits, still seems solid to me. I don't know, maybe I'm way off. Maybe the majority of people are extremely happy in life and everything is awesome and my own personal experiences and issues have completely tainted my assessment. I concede this could very well be true. I hope so, anyway.

Now that I'm trucking, I witness a lot of people make very poor decisions while I'm out here driving around the USA every day. For example, on my drive over to the hotel where I'm staying tonight, I watched a tractor trailer traveling in the right lane pop over into the left lane quickly and unexpectedly, cutting off a whole row of other cars which caused everyone to brake hard to avoid crashing. The trucker did this because he was met by a group of three cars all merging onto the highway where he was. Two of the cars merged perfectly, but one of them freaked out and just kept driving right alongside the big rig all the way to where the merge lane disappeared and then found herself driving on the shoulder kicking up dust and debris. I think she expected the big truck to move out of her way and when it didn't, she didn't know what to do. The trucker finally did move over, but he shouldn't have. By doing so he created an even more dangerous situation. As it stood, the only person in harms way was that idiot who didn't understand the rules of merging, but when that trucker swerved over into the left lane like that, he created a danger zone for all the rest of us in his vicinity. The whole thing was fucked up and could've been avoided if people simply understood the rules of the road, and actually it's very simple because there are only three things that can be done when merging:

1) get up to highway speed quickly
2) yield to highway traffic (they are not required to yield to you!)
3) slide into a hole ahead or behind any vehicles already in that lane

That's it; those are the only things that can be done when merging onto a highway, and yet I see it dozens of times every day, people who have no clue what to do and it creates an extremely dangerous situation every time. The vehicles traveling in the right side lane do not have to yield to those who are merging. If the left side lane is open and it's safe to move over, then it's courteous to move over and help those merging cars out, but it's not required so don't expect it! I see so much dumb shit out here that I could literally turn this blog into a Driving Tutorial explaining how to operate motor vehicles safely and correctly, but I'll be (brutally) honest, I kind of don't care. Maybe vehicular deaths are just one way of keeping the human population in check? We breed a lot and we live a lot longer and we don't get killed by wild animals anymore. In nature, a grizzly bear wouldn't care if it ate a newborn human baby or a full grown adult. It's just a random act of hunger that ends one way or the other. Same thing with car accidents.

So, what uplifting topic should I cover next? Wait, let me mix another vodka drink. Hey, did I ever tell ya'll why I prefer vodka over anything else? It's because my grandfather was Russian! So it makes sense that I love vodka so much. Trickle down theory right there, bitches. Oh wait, am I allowed to say 'bitches' in America? Will Google flag my blog for being insensitive? Hmm, I wonder.
Yeah, please don't get me started on the whole Antifa/Feminist/Leftist anti-free speech thing that's happening in this country. The one thing I care about more than anything is the ability for me (and anyone else, even a despicable Nazi) to be able to say or express thoughts out loud and not be aggressed against. If I am not hurting you financially or physically, then nothing else matters. Your feelings can kindly go fuck themselves, they are not protected by the Bill of Rights. The definition of tolerance is NOT forcing people to like or accept you, but quite the opposite actually. True tolerance is: even though I don't like or accept you, I still tolerate you as a human being possessing the same inalienable rights as me, regardless of your idiotic gender identity pronoun. As long as you don't force your way of thinking on me, I will tolerate you being you, as long as you tolerate me not liking you. It's really that simple, people. Being a dick or being insensitive or being ignorant is not a criminal act. It is part of being free and having liberty over our own self. But the second you start forcing people to bend to your idea of what's correct via rules and laws and legislation, that's when I have a huge problem. If this country ends up going down this twisted path of social justice warrior bullshit and we wind up living in version of life where everything we say (or write) is monitored and censored and adjusted to protect the feelings of the masses, that's when I call it quits. I'm serious. If that day ever comes I will do one of three things:

I need another drink already because I'm mixing them in these tiny, plastic hotel cups. Don't judge me! Oh hey, I've got one last neat thing to talk about then I'll stop writing this blog and move on to poetry or short story or novel editing (yawn). Recently I ran out of my Dr Bronners hemp almond soap and went to the store to buy more. Low and behold, Dr Bronners seems to have been replaced with a competitor: Dr Jacobs. (free market capitalism in full effect). Not wanting to go without shower soap, I reluctantly purchased the bottle of Dr Jacobs hoping that it would be equivalent to what I'm used to using. Check it, so I tossed all my shower stuff into my backpack and walked from my truck all the way into the truck stop and rented a shower room. I go in and start setting everything up. I get in the shower and reach for my new bottle of soap but as I try to squeeze some out, nothing happens. I unscrew the lid and see a protective seal. Duh. I try ripping it off with my fingers, but can't seem to get a grip, so I try with my teeth. No whammo. I try and try removing this stupid little seal with my fingers and teeth, but to no avail. Apparently the manufacturer has used some sort of super astronaut glue (the kind not used to keep the Challenger shuttle together) and I am powerless against it. So there I am, naked in the shower, wondering how in the hell I'm going to open this damn bottle. I start listing off in my head all the things I have with me in my backpack that could puncture and open it. My set of keys are the only thing I can think that would work, but that requires me to leave the shower and go grab them, so I pause and look around at my immediate surroundings: a loofah, a bottle of unopened Dr Jacobs, a shower curtain, and... metal shower rings! I smile as I reach up and unhook one of the rings, removing it from its former purpose. I then proceed to rip through that goddamn amazingly thick and strong soap bottle seal with the open end of the circular hook. Works like a charm! I never had to leave the shower.

That little story brings me to my current situation. As I mentioned earlier, I'm renting a hotel room for the night. Overall the room is fine, but one huge negative is the location of the AC unit. The retards who designed the layout of the room decided to install the AC directly next to the desk/work station area, which means while I'm sitting here typing up this blog, the AC blows cold air right into the side of my body. This is almost as aggravating to me as people who can't merge properly. So here I am again, faced with a situation that requires me to use critical thinking. My choices again are few. I can leave it turned off and sit and write in the stuffy heat. Or I can move my laptop to the bed and do my writing from there (grrrrrrrr). Or I can freeze myself while I write. Those are my only options right? Wrong. Here's the solution I came up with: 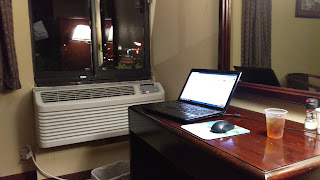 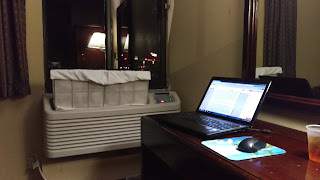 Upon inspecting the AC unit I realized the plastic air flow vent was not directional, meaning I could not tilt it upward and away. When it's turned on it only blows one way... right at me. However, while inspecting it I noticed two separate removable filter screens. I pulled them out and wrapped a pillow case around them and stuffed them back into their slots just a bit, creating a deflective shield that forced the cold air up to the ceiling instead right at me. Viola! Problem solved. You might be wondering why I just shared these two stories. Well, it kind of ties into the stuff I already talked about. I wish more people would take a quick moment to simply think things through before acting (or reacting). It doesn't take much. Sometimes the answer is right there in front of your face, but if you allow emotion to trump logic, you may end up walking wet and naked to grab a set of keys or end up typing stories while freezing your face off or driving alongside a semi truck on the shoulder of a highway. The earth is your oyster, bitches, eat it. Bye.

Posted by solarjinx at 5:42 PM