"I used to write poetry," Bill said as he leaned over Laura's leg and grabbed the bottle of oil. The old sofa they were sitting on had some sort of plastic lining in the cushions and made a crunching sound as he fell back into it. He twisted the lid off the bottle and poured a little oil onto a small piece of felt cloth, replaced the lid and placed it into Laura's outstretched hand. He picked up an eight inch length of metal tubing from a pile of other metal parts in his lap and began wiping it with the oiled cloth. "I also wrote short stories. Mostly cute fluffy stuff, you know, fun little snippets of life. Little paragraph boosts that would make you feel good after reading them. Sometimes they had no purpose other than to make people smile. No plot, no characters, just.. I dunno.. just quaint ideas with a mild revelation at the end." He paused before adding, "I miss that."

Bill finished cleaning the rest of his metal parts in silence. Every once in awhile he would steal a glance at her, but she never let on whether she knew or not, or showed any indication that she cared either way. She simply worked on her own pile of parts in diligent duty, obliged by the openness of the dead air between them. He allowed himself to remember back to when they first met, it seemed like years ago, but in reality was only about seven months. It was karaoke night. He noticed her early on. Her tiny little body, pinned between two other men, all three squished onto a cushioned bench designed for two. To the right of them, a table where he sat. The song being sung was Diana Ross' "I'm Coming Out", only it wasn't being sung by her, but instead by an enormous (and obviously gay) man wearing olive white Docker pants rolled up past the ankles and a baby blue Ralph Lauren polo shirt that hugged his obese frame:

The entire room was laughing to the point of convulsion, bottles of beer and glasses of three dollar well drinks were being raised and clanked in celebration as this fat, gay man belted the lyrics and gyrated erotically on a flimsy stage made out of two wooden pallets and a piece of cheap carpet. The expectation of it collapsing at any moment only added to the hilarity of it all. Bill looked over at her again, they made eye contact, shared a smile that lasted through a chorus, and before the night was over they were singing inebriated duets on a stage that never collapsed. Her name was Laura and they fell in love before the bird songs of spring were sung. They were the best days of his life. Each outlasting the prior, exceeding all expectations and seemingly creating immeasurable pleasure that just kept piling and piling until they were both in a continuous state of maddening bliss. Love blossomed, made summer beautiful. Inseparable moments spent exploring every aspect of life, every nook and cranny of their small humble city. Their passion created an emanation of energy that enveloped anyone within ear shot. They lived their days as one. It wasn't long into their relationship, though, that they stumbled upon a flyer that read: "With PANDA gone, is there hope for AMERICA?" Below the headline, a picture of a panda bear chewing on a missile, below that, an internet address (which they visited together later that night). And that's when everything changed for them.

Bill looked over at her and said, "I never got to show you that side of me. Writing was the biggest part of my life before I met you, and I never got to show you. Everything has happened so quickly, Laura." At the mention of her name she looked up, but not at him. She had finished cleaning her last piece, paused momentarily while rotating it in her hand, then leaned forward and set it on the coffee table in front of her. It clanked loudly against the other metal parts. She withdrew her leg from underneath his, arose and stretched, her fingertips nearly touching the ceiling of his apartment's shallow living room.
"I know, honey. There is so much exploring we've yet to do, and if we get through today I promise you, we will learn everything about each other. For example, I used to paint. I would love nothing more than for us to sit down and browse each others' work, with nothing else on our minds except that. But," she turned and looked him directly in the eyes, "we have to get through this, okay?" Laura walked to the kitchen and pulled a coconut water from the fridge. "You want a C2O?" He answered no and she closed the door. She stared at the kitchen window and allowed herself to got lost in the falling drops of rain that created random art morphs on the foggy glass while she sipped. She watched faces appear and disappear, messages form and dissipate. Her thoughts moved like the windowed water: she recalled her favorite sun dress she wore as a child... her 9th grade history teacher... her first car... her first kiss... her first...

Her trance was broken by the sound of an automatic weapon being slid and cocked to the ready. She walked back into the living room just as Bill was standing up, brandishing his reassembled Springfield Armory 9mm pistol. He held it out with his right hand, casually flipping it back & forth a few times, catching the light in its newly polished shine. She watched as he slid the weapon into the holster that hung just beneath his left armpit. He then bent down and pulled a black tactical shotgun from beneath the couch, grabbed a handful of shells from a nearby box of ammo and began loading them into the chamber one by one. When finished, he set the loaded shotgun down and began loading bullets into yet another pistol that lay nearby. Laura watched all of this and thought about what they were about to do. She ran through the details of their plan in her head, repeated all the necessary steps leading up to their moment of entry, and recounted their predetermined alternate plans of escape. "It can be done, " she thought to herself, "we can pull this off."

She walked back to the couch, sat down, and began assembling her Glock. She had never loved a man as much as she loved Bill. And she had never loved her country more than she did at this very moment. This commingling of love was moving powerfully inside her as she considered everything she had learned over the past several months. All of the clandestine meetings held with other members of the SCDC and all of the important topics they discussed (i.e. loss of freedom, deterioration of liberty and the Constitution, government corruption, America's founding fathers, revolution against tyranny, etc). She was moved to reason, and that move had a logical end, a final step of action instead of reaction. This was her moment in history, her time to be something bigger than a painter or a lover or a little girl in a sun dress. Her country had fallen and it needed help getting back up. Their plan was a good plan, Jefferson would approve. The tree of liberty would be refreshed soon, regardless the outcome.      CHA-CHINK!    She stood up and holstered her own weapon, walked over to Bill and hugged him tightly. They looked at each other lovingly, nodded, grabbed their gear, walked out of the apartment and into the pouring rain of the day. It was a good rain, it smelled wonderfully clean, and the droplets seemed to make important shapes as they fell at their feet. They stepped over puddles that resembled freedom, honor, and death. 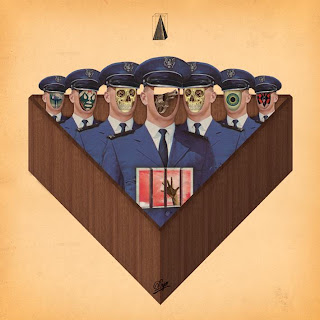 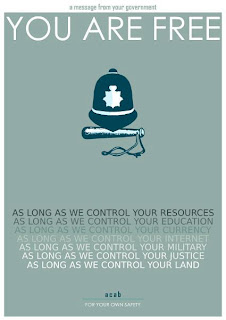 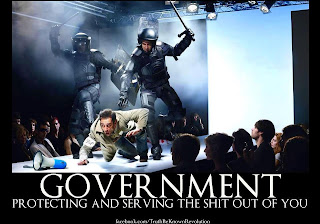 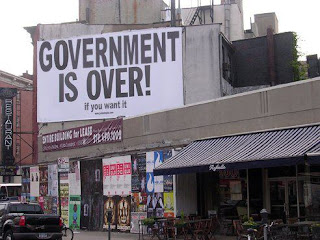 Post Script: The other day I noticed signs posted around my neighborhood that read: Salem Civil Defense Corps. Not knowing what it was, I googled it and read up on what they were all about. The short story you just read was inspired by my thoughts surrounding it.
Posted by solarjinx at 1:02 PM