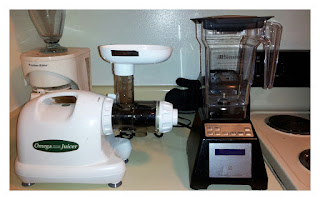 The Omega Juicer and now a Blendtec Blender? Oh yes, my fruity friends, I have gone All The Way. From here on out it will be a hemp protein/bulletproof coffee smoothie for breakfast, an avocado/hummus/turkey sandwich for lunch, a tall cup of go-go-green juice in the afternoon, and then whatever I scrounge for dinner. I haven't thought that far ahead yet. Probably woodpecker soup, or maybe garlic fence lizard. We'll see. 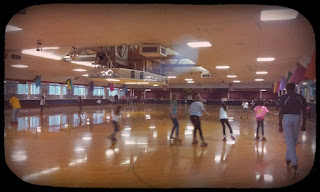 I went rollerskating yesterday with some friends and let me tell you, if you ever question whether you're getting a good workout at your gym, just go rollerskating for two hours and compare how you feel afterwards to how you feel after your gym workout, then you'll know. Holy shit, am I sore! Not only that, but I crash/stopped into a wall when I was first getting my balance back (it had been nearly two decades since I last went skating) and bent the pinkie on my right hand all the way back. That was pretty cool. I could feel a tingling sensation run up the length of my arm and into my neck, and the pain in my hand is pretty intense today. Hand crash aside, I must say I was skating like a boss out there amongst all those little tykes. They didn't stand a chance!
At one point I found myself being chased by three orange STAFF shirts for speeding and violent passing behavior. I was flanked by two female employees with whistles, each trying to squeeze me in, while the third sped around and blocked my forward path. They were attempting the classic box maneuver on me! I surmised that the girl on my left was the least skilled of the three, so I shoved off her and did a quick sketch-out exit spin that positioned me at her left, and as the lead blocker tried to compensate by skid skating to her left in an attempt to reestablish the box, I grabbed the closest kid near me and used him as a tactical diversion. The lead girl tripped up and wiped out and the left-side flanker had to brake hard as to avoid pummeling the kid, so now it was just me and the last girl. I peered over my shoulder to gauge her distance. Hot damn, she had a look of fiery determination as she pumped viciously to keep up with my fast break. She was a quick thing. And she was gaining. As I reached the next turn and began cross-cutting the red line, I felt a hard tug on my shirt... shit... she had me! I continued skating hard, but she wasn't letting go and I was gradually slowing down. It was now or never...
I lowered my center of gravity, tightened my posture, and executed what I call "the spiral of spew". If you've ever watched figure skating then you know what I mean. As I began spinning and gaining momentum, her grip grew tighter in fierce determination as the centripetal force spun her wildly around my body. And then, when I felt I had reached my maximum, I removed my hat and tossed it down into the path of her skates. My plan worked flawlessly. As I skated away victoriously, I could hear the sound of skin and skates smacking against the wooden floor behind me. I reached the EXIT and looked back. She was still on the ground, rubbing her elbow and cursing madly. The other two workers were skating over to her. I had escaped! I had won! I had battled the best that rink could throw at me and shrugged them off with ease. I could have sworn the song that was playing as I made my way to the locker was Another One Bites The Dust by Queen, but don't quote me on that. As I was removing my skates and putting on my shoes, my friend skated up and sat down next to me. She stared at me quietly, with a look that could only be interpreted as venerable admiration. I knew she was proud of me, she didn't have to say anything. I wondered if maybe she wanted to touch the skates that had, only moments ago, performed such magical maneuvers, so I motioned towards them and said, "Go ahead, you can touch them".
Later that night, while curled up in a blanket in the back yard, trying to keep warm in the frigid Oregon rain, I replayed the events that had taken place at the rink and smiled proudly. I was a conqueror, damnit! A conqueror who had locked himself out of his house.
Posted by solarjinx at 11:10 AM