The whole point in choosing a cat over a dog is because cats are independent creatures, they don't need constant affection from their owners. Or at least so I thought. It turns out that I ended up with a Cog for a pet (a cat that acts like a dog). I guess that's what I get for rescuing an 11 year old cat who needed a new home because it's elderly owner passed away. Let me explain the weirdness for you, and while I'm doing that I'll also explain why I think he does it. First, let's meet Snug Bug: 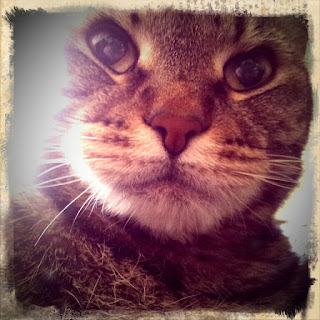 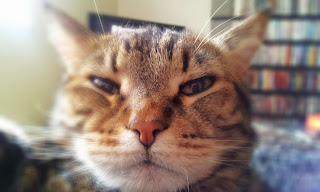 The first and most obvious eccentricity is that he doesn't appreciate a gin & tonic. Whaaaat? Alright, but seriously, his eating ritual is so bizarre. He absolutely needs me to walk with him to his food bowl and stand next to him while he eats. If I don't do this he just sits on the edge where the dining room carpet meets the linoleum kitchen floor, staring in at his food bowl, meowing. I get perturbed over this sometimes, but that's my thing, not his. And since he likes to be babysat while eating, any time I go to the kitchen for whatever reason (i.e. a drink of water, to make coffee, to get a paper towel) he immediately runs in and thinks it's time to eat again. Even if he just ate five minutes ago! Oh, and while he's eating food he breathes excessively and makes creepy wheezing meow sounds that mix with the sound of him crunching and munching and stuffing his face. I've learned not to use the kitchen anymore. I moved my refrigerator into the living room, as well as the microwave, the coffee pot, dishes and silverware. I will make this relationship work!

So he's a weirdo during feeding, what else? He doesn't like to be petted by my hands very much, but I've learned he absolutely loves being petted when I use my feet. For example, when I'm sitting on my couch and he's beneath the coffee table, he will roll over onto my toes to get my attention. Then when I begin petting him with my feet he gets whisked away into kitty heaven. The purring becomes very loud and he'd gladly stay down there forever as long as I kept petting him... with my feet. If I decide to lean down and pet him with my hands, the trance is broken and he suddenly becomes less interested. He'll get up and move into the dining room and meow for me to walk him to his food bowl. The only time he ever encourages me to pet him with my hands is in the bathroom. When I'm taking a shit. He will rub against my legs meowing like all get out, practically begging me to pet the ever loving-crap out of him. And so I do, in the stink of the poo, I do.

Did I mention he has an addiction to plastic? One time I went away and left him for one day and one night, and when I got back home I discovered he opened the cupboard where I keep all the plastic grocery bags (for cleaning his litter box) and had helped himself to them. He had also gnawed on my shower curtain long enough to perforate it with dozens of tiny teeth holes. He found my ream of printer paper and chewed up the plastic packaging that it comes in. I am constantly shooing him away from the trash can. He loves walking up to it and chewing on the part of the garbage bag that hangs over the lip of the can. Anything plastic, I'm telling you. This cat is stuh-range!

He has separation anxiety. Every time I leave I can hear him meowing inside the apartment. He moves to the door and waits there for me to return. In the mornings he jumps onto my bed and meows at my face until I wake up. When I take a shower he sits at the doorway and waits for me to get out. Once he can see me again, he walks off into the living room and sits at the kitchen, staring in, waiting. Right now he is sleeping next to his cat scratch tower. He likes that thing, well the bottom of it anyway. It has multiple levels, reaches halfway up the wall, but he only uses the very bottom. He scratches his claws on the carpeted base and then falls asleep next to it.

So, why do I think he adopted some of these strange behaviors? Because he spent his whole life with an elderly woman. She probably babied him during food time (like all grandmothers do), and since she was old she probably couldn't bend over to pet him, so she just used her feet while sitting in her recliner (and he just got used to it). The only time she could reach with her hands was when she sat on the toilet, so that explains that. He didn't have contact with other animals or people, it was pretty much just grandma and the cat for a really long time, and then she died and he had to experience not only that, but also relocating to a new home and a new companion. Sure, he's going to be odd about stuff, I get it. As far as the obsession with plastic goes, I really have no idea about that one. It's hilarious though, even more-so that it's a complete mystery. Oh, and one last thing... I did not choose the name Snug Bug, obviously. That's the name that was given to him 11 years ago, that's the name he'll die with. See what a nice guy I am :)

I almost forgot, I wrote a poem about him awhile back and I wanted to share it. Here it is:

a grandmother had to die
in order for us to become roommates,
and in case you aren't keeping score:
four world dictators have fallen, and still
you question the safety of my sheets..
beneath my bed you sleep.
at 4:30 every morning you decide it's time
to lick your butt aggressively,
my alarm doesn't go off until 5am..
please stop.
you won't eat unless my feet are next to you,
it's a little cute, but I refute the purpose.
you circle my ankles like a shark,
back arched, body rubbing against shins
until I give in and the hand of heaven
reaches down to pet you.
it's a little cute, don't stop.

right now you are curled up on my toes,
purring while I write this poem,
and I'm watching the ice cubes melt in my empty glass
because I refuse to disrupt your cuteness.

yours truly,
the partially buzzed poet.
Posted by solarjinx at 10:30 AM