Show Me The Way

I've discovered some choice new music lately and while listening to it, I find myself thinking back to a blog entry I wrote many months ago. It was a list of my favorite albums, and in hindsight, I realize there were several albums that should have been included and weren't. So what I'm going to do is go back and revise that list periodically, eventually shaping it to the point of perfection. And while I'm on the subject, here's an album by an artist that needs to be listened to by everyone: 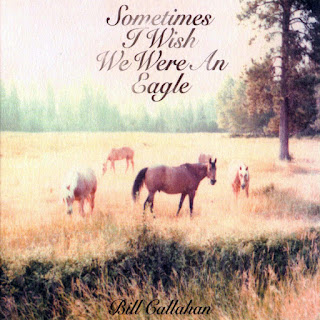 Bill Callahan - Sometimes I Wish We Were An Eagle
Yes, this will be on that list. I've listened to it at least forty times now, with each new sitting bringing me even closer to the heart of what this album is all about. When I heard it for the first time I was instantly reminded of Mazzy Star. Both create atmospheric music that can easily put their listeners into deep trances, with or without the help of drugs. Where Hope (from Mazzy) gives the feeling of singing her lyrics shyly from a dimly-lit corner of the back part of a room, Bill seems to step forward to the lip of the stage with the intent of haunting his audience face-to-face, using his baritone delivery of unstructured lyrics combined with instrumentation that evokes emotion of an eidolic level at times. If the psychedelic community hasn't discovered this album yet, they eventually will. I imagine these songs would hold hands quite well with a DMT dance late Saturday night. "Show me the way, show me the way, show me the way... to shake a memory."

Remember that neighbor of mine who decorated his car for Christmas? Well, he's at it again: 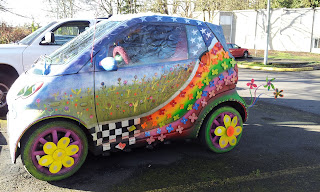 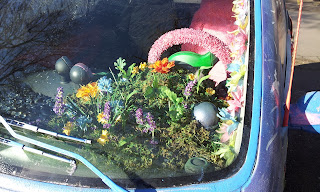 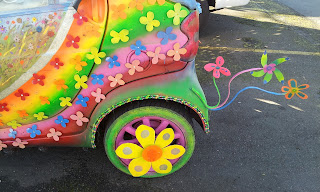 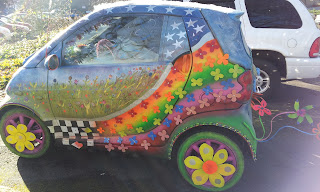 Who is this guy? I must get to know him. The next time I see him out I'm going to invite myself into his life via fine, locally brewed, craft beer. I'll dangle a 22oz bottle of Ninkasi IPA in front of him as though it were an impossible lure to resist, which to be quite honest, it is. If he spends this much time on his car, just imagine what he's done as far as interior apartment decorating goes. Holy shit, I'm infatuated by the thought!

Speaking of beer, I'm going to start keeping tabs on which ones I've tried and whether or not I liked them enough for repeat purchase. I'll take a pic, include it on my blog, and give it a quick thumbs up/down. Granted, I am not a beer snob, nor do I care to ruin the experience of enjoying a finely crafted beer by watering it down with preposterous labels and descriptions such as, "it has a remarkably bold, yet subtle approach, with a captivating aroma". Um, dumb. No, I'm just going to say if I liked it, that way I can remember in the future. And while I'm on the subject, allow me tell you about a wonderful treasure located over on 17th and State Street. It's called Capital Market and it's a mecca for beer lovers. 36 glass doors of refrigerated beer labeled by state or country of origin line the walls. They also have an additional double-sided shelf that stretches about a hundred feet with even more (unrefrigerated) beer. Singles, bombers, sixers, cases, cheap beer, craft beer, local beer, imported beer... if you have a more versed palette, chances are you'll find something here to go home with. That being said, let's peek at a few pics: 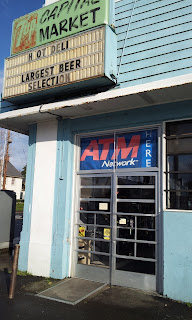 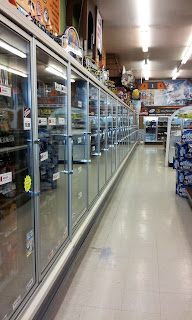 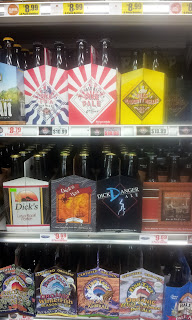 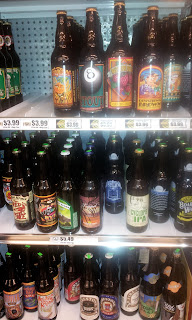 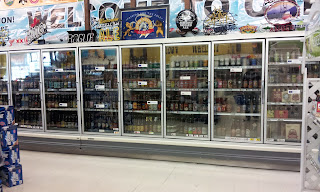 Can you see why I love this place? If it's something other than beer that you're looking for, I might recommend going elsewhere. Sure, there are other shelves stocked with miscellaneous items found in a usual grocery store, but I'd question the expiration date on some of that shit. This store is sort of ghetto and it boasts a hot roller "deli" that scares even the seasoned garbage man in me. Some of the natives of the area seen meandering in and around the store are of questionable nature, but don't be scared to stop and go in, after-all, local craft beer is well worth the risk of a knife-point mugging.

Write on, fellow bloggers.
Posted by solarjinx at 4:04 PM