I recently had the (dis)pleasure of experiencing The Bins (not to be confused with "the bends" which can kill a scuba diver). The Bins on Portland Road (which could possibly kill a shopper) was a unique shopping experience, one I'm not sure I'll repeat anytime soon. If you've never been, here's the gist of it: in every family there exists that one relative who gives the family name a bad reputation, well for the Goodwill Corporation, this place is that person. I love shopping at thrift stores, the regular ones. You know, those with stocked shelves and clothing racks and price tags and dressing rooms and check out lines, but at The Bins... no, no, no... that's not how they roll. Picture a large building with a wide open floor space, sort of like a roller skating rink, minus the disco ball and pop music. Now picture dozens of big blue, waist-high, plastic bins on wheels lined up in rows all throughout the area. These bins are filled to the rim with the discarded filth that all the other "real" thrift stores didn't want. And let me tell you, people go absolutely nuts over this stuff. They walk along slowly, rummaging through each bin like badgers digging for grub worms. Sometimes the excitement of their discovery is so great they toss the item behind them without even looking, and instead of landing in their own shopping cart, it stupidly falls into another. They just move through the bins like, dare I say... zombies? But instead of brains, it's broken Tonka trucks with missing wheels and used Advent calendars they're seeking.

After spending some time sifting through a few of these bins, I realized just how gross this endeavor was. Since all the junk is heaped into piles you have to really get in there and move stuff around, and if your mission is to locate the next item that will bring you riches on Ebay (or a spot on the Antiques Roadshow) then you have to dig all the way to the bottom of the bins. And this, my friend, is where you may run into some lovely little things, i.e. used underwear, broken shards of glass, tetanus, hypodermic needles, food remnants, fungus, miscellaneous bacteria, etc. Once my brain tuned into the possibility that the rubber bouncy ball I found that didn't bounce so well could actually be made of shit, I sort of lost interest in The Bins. But just as the dying atheist who calls out to God moments before death, my interests were renewed. A few rows over I noticed a line of people began forming where bins used to be, but had been rolled away. A few final bins were removed leaving an empty row lined by enthusiastic onlookers. They stood there patiently, elbow to elbow, occasionally glancing over their shoulders to see if The Man was coming with new bins. Anticipation turned into excitement as they continued waiting. I moved in closer for a listen:
"No, not everyday, but a few times a week, when I can."
"My wife and I, we come everyday."
"That's right, we do. Yesterday I found shoes, a can opener, a rack, a dress for my niece... he got a wacker."
"I couldn't make it yesterday, my wife had surgery. She's home now though."
"Oh my, how sad. I sure hope she..."

The sound of the swishing doors created a Pavlovian reaction within the ranks. Heads turned simultaneously, fingers started dancing against hips, bodies bobbed up onto toes, conversations ceased. All eyes were transfixed on that rolling blue bin, including mine. "Thwack, thwack, thwack, thwack..." It's bum wheel created a hypnotic ambiance as it made the long journey from the back side of the building to it's final resting place in the middle of the store. I couldn't help but think of a death row prisoner, cuffed and shackled, slowly making his way along the green mile while everyone watches and waits. We all now how it ends, but we want to see it, experience it, take part in it. We want to be there when the soul gets ripped from the body, and go home to our families with a new respect for life. We feel a desire to be part of the consequence of actions that we all possess, but don't always act upon. We are humans, we live in a self-created environment, detached from the natural world, but we still feel the animal lurking deep inside us. And sometimes it comes out in people, and they pounce and latch onto their prey, ripping and tearing and clawing their way inside.

Within seconds the blue bin was completely ravaged. Scores of objects tossed into carts behind them. Once the buzz of initial attack was over, the group would simply shift in unison to the next empty space and wait for another bin to arrive. I watched the main pack annihilate bin after bin, and the scavengers would move in behind them and rummage through whatever was left behind. Wait, attack, scavenge, repeat. The difference between animals and humans is that when animals get their fill, they simply stop. Humans just keep on killing, we're always hungry for more.

Oh hey, I took some pictures! Of course ;) 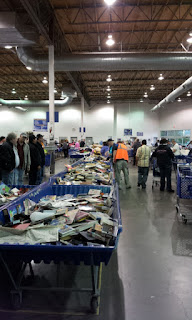 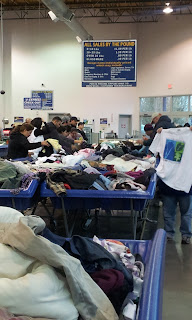 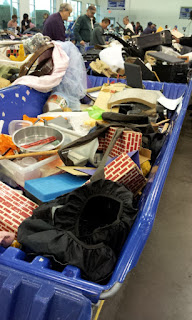 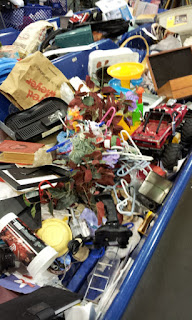 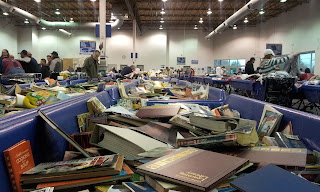 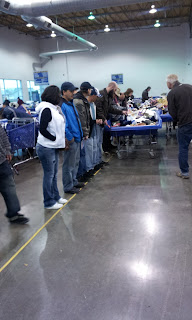 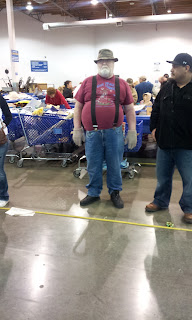 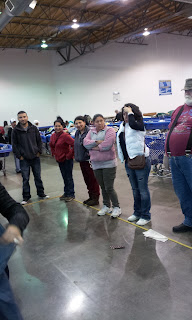 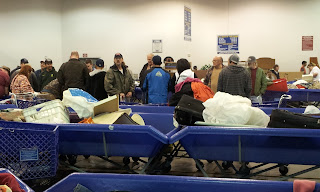 Posted by solarjinx at 9:45 AM