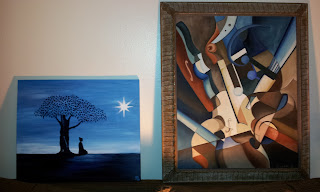 The one on the right I discussed in my last update, but the one on the left I didn't mention. It was a special request painting done by a local artist here in town. I sent her a picture of what I had in mind and within days she replied with a picture of the finished piece. Wow! The painting is of Siddhartha meditating beneath the bodhi tree before reaching enlightenment and becoming Buddha. So now I have two paintings resting on the back of my love chair, where they will stay for awhile. Have you ever tried hanging artwork on a wall using only one arm? Yeah, it's not easy.

In this paragraph I'd like to give a few shout-outs. I'd like to give a huge and heartfelt 'thank you' to all the people I work with who brought me dinners and desserts the week following my surgery. I was in a lot of pain and was in no condition to leave my apartment, and since I have no family here, you guys and gals were it. I appreciate it all, and can't possibly thank you enough. And to both of my bosses, thank you so much for the Leo Kottke and John Mellencamp CD's and the huge box of candy. That was awesome! You guys are terrific, I'm thankful to work for/with you. And to my family and friends who keep checking in on me to make sure I'm still alive, thank you. I know I can be quite the recluse sometimes, but you guys put up with it and keep coming back for more, very cool. And to Snug Bug the Disaster Cat, I realize you're getting used to having me around all day every day and all I can say about that is... don't. This is only temporary, you little fat-ass rodent, please stop shitting bricks.

Today is Saturday Song Salute. Yeah, yeah, I know it's been awhile. Sorry! In the spotlight this time around is the band Citizen Cope and their song "D'Artagnan's Theme". It can be found on the 2004 Clarence Greenwood Recordings album, which by the way is the lead singer's name. When I first heard D'Artagnan's Theme I was immediately drawn to it's laid back, semi-sad sound. After listening to it twenty times in a row I realized I had no clue as to what the lyrics meant. To this day I still don't, I only know that D'Artagnan was one of the 3 Musketeers. So now it's up to you, fearless listeners, to work out the meaning of these lyrics for yourself. Headphones ON, volume UP, music IN...
D'Artagnan's Theme (lyrics)