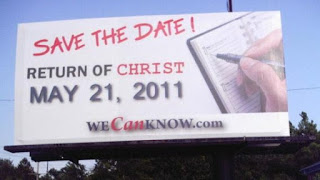 For those of you who aren't in the know, the rapture will occur tomorrow. Did you notice the usage of the verb 'will' in that sentence? Yes it was intentional, and yes I'm quoting someone else. Do I believe God is coming back tomorrow? Um, no, but let me tell you who does... Harold Camping. This guy has spent thousands of dollars posting the May 21st prophecy signs (like you see above) on 2,000 billboards nationwide. He's very serious about this, as are many others I'm sure. I'm guessing he overlooked the part of the Bible (Deuteronomy) that says false prophecy is punishable by death. Oopsie!

Well look, I'm not here to debate or discuss the Christian religion or the myriad ways that the fundamentalist wackos taint it, I'm just here to write one more blog entry in case all of this is true. You see, if millions of people disappear tomorrow there's a good chance the internet will be affected, and I don't want my last words to be a silly poem about a 70's cartoon movie based upon a Robert Crumb comic. So what will my last words be? Heavens, I don't know.

For starters, check this website out: http://eternal-earthbound-pets.com/  For those of you who don't feel like taking the time to check that link out, basically it is a group of capitalist atheists who are offering a service to those Christians who will inadvertently abandon their pets at the time of rapture. For 135 bucks (to be paid in advance, of course) they promise to make sure their pet is taken care of here on Earth while the saved go whittle wood with Jesus (hey, he was a carpenter after-all). What an genius idea. And it's working, they've already made over $30,000. Badass!

Okay, enough about tomorrow. Sorry I've been so quiet lately, had some personal things going on in my life and my writing took a slide because of it. I have so many ideas for new short stories, I'm really excited about writing them. I promise I'll get on it and start penning them out for you to read. I'm moving into a new apartment at the end of this month, so more than likely I won't get serious about writing until after I've settled into the new pad. Until then, maybe I can log on and jot a few paragraphs here and there, give you guys some simple blogs to read until I get cracking on the big stuff.

Well there you have it, my last blog before the May 21st rapture. See you in the afterlife, bloggers!
Posted by solarjinx at 11:07 PM