It's tax time and I owe Uncle Sam six bucks. Every year I play with the numbers, trying to get what we owe each other down to zero. This time around I almost nailed it. A small part of me wants to send in a check for the amount of 5.99, just to see if Mr. Suit & Tie IRS guy is really on his game. A penny. Would he catch it? And if he did, would he send me that dreadful letter stating how I underpaid and that I still owe Uncle Sam another penny? Hmm, I wonder...

This past month was a bitch, financially speaking. First off, I had to purchase my plane ticket so I can fly to Pennsylvania in April (-425). Secondly, I have a new car that I'm making payments on now, so there's another added expense (-300). Insurance is higher (-100). My Toshiba laptop crapped out on me, so I got a brand new Asus (-550). Rent came due, like always (-425). And now for the real kicker:

Just the other week I was drinking a few gin & tonics, trying to get some writing done, when I ran out of ice cubes. Mind you, I had plenty of ice inside my freezer, but here's the catch: I never defrosted that thing since I've lived here, and each surface area was covered by a 3 inch thick sheet of impenetrable ice. Seriously, it looked like a glacier broke loose from the Arctic shelf and ended up inside my freezer. So I grabbed my metal spatula and went to work. Within five minutes of frenzied sidearm hack-attacks, I destroyed my spatula. Damn! 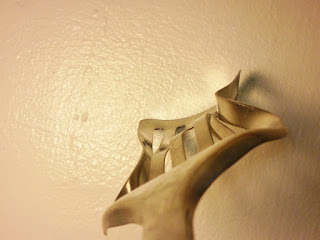 I decided it was time to upgrade my arms, so I grabbed my butcher knife and a hammer and commenced chipping away at the frozen beast that lay dormant in my freezer. Whack! Whack! Ice chips blasted me in the face and flew throughout my kitchen, I didn't care.. it was progress! A few minutes into my archeological endeavor I realized, somewhere lying beneath all that ice, were the freon lines, those curved aluminum tubes that held a gaseous secret within their hollows. On pure speculation (derived by the buzz of three gin & tonics) I concluded they were probably attached vertically to the backside wall. As it turns out, I was mistaken.

I continued whacking away, stabbing fiercely with my butcher knife, using the hammer against the handle for deeper penetration, when suddenly... HISSSSSS!!! I got blasted in the face by an invisible enemy: I had found the freon lines. Replacement fridge (-225). Awesome.

And that, my friends, concludes this blog. Until next time!
Posted by solarjinx at 5:21 PM 4 comments: 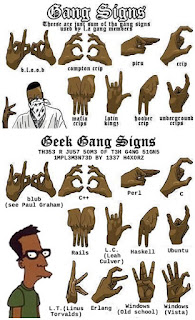 When I was in college, freshman year, I worked part-time at the McDonald's to earn fun money. I was still at that point in life when a kid defines "fun" as Magic The Gathering games on a Friday night instead of poker. It turns out all the other "kids" were more socially advanced than I was, they didn't have to work at McDonald's for their fun money.

I did, however, learn how to tap into my grown-up rage at a very early age. Jeannie, the skinny blonde who worked the register while I dropped fries into a boiling grease vat in the back, was a local girl working for her own fun money. She wasn't in college though, she was in a gang. After a few blowjobs and the promise of future sex, I was lured into her violent circle of friends. Suddenly, and without initiation, I had become a Cue Dawg. I roamed the campus with a mixed group of guys and girls, mostly guys & mostly black. At night they would use their baritone voices to bark and howl like a pack of dogs and the first person to yell at us to shut-up would get their heads kicked in promptly.

I was at an unfair disadvantage. With the lingering promise of sex with Jeannie, all of my exit strategies were lost in a haze of hormones and I had no choice but to rally with the troops and accept my new found place as Jr. Cue Dawg in residence.

I never did have sex with Jeannie. It turns out she was having sex with Sean. He was very tall and possessed enough hatred and ill-will toward other humans that even the local newspaper had a few things to say about him from time to time. Jeannie quit McDonald's two months after I met her. And I found my painful way out of the only gang I was ever in.

And after just one year, I also found my way out of college. It turns out I leapt ahead of the other kids in the socially advanced department. I got pretty good at using my fists to boost my confidence during awkward conversations.

The weeks, months, years following college were every bit of a failure as college itself. I learned nothing. Well that's not entirely true, I did learn an important lesson about dating girls with Italian last names: don't. My newest girlfriend was also in a gang, her name was Laura Giorgano, but this time I managed to avoid being adopted in and instead I hung out with her a lot. At one point I upset her, it was over something simple and silly. I laughed it off, because, like I said, it was simple and silly. She took it personal. She broke up with me that day, and by noon the following day her entire gang was after me.

Now that I'm much older and the years of my youth are far behind me, I play very little Magic The Gathering and I long for a do-over at the whole college thing. I also tend to keep my arms at my side when engaging other humans, it lends for a much better interaction.

Oh, and since moving out to the west coast, I've managed to keep plenty of distance between me and the Bloods & Crips. It just works much better that way, really.
Posted by solarjinx at 9:11 PM No comments:

Posted by solarjinx at 5:10 PM No comments:

I have managed to paint myself into a corner. As I stand here with my back against the wall surveying the fresh coat of paint all around me, I look down at my feet and realize I've limited myself to six inches in every direction. I look across the room and see my girlfriend trapped by the same brushstrokes, trembling and crying and trapped in her own corner, crouched down and hugging her knees tight against her chest. To my left is a sliding glass door that exits to the outside balcony. It is open and I can feel the gentle breeze of life as it rushes in and swirls around my body, taunting me with its freedom. There is a cat poised on the railing, tail twitching wildly as it stares down at something of interest and meows loudly.

I look back at my girlfriend. She now has her arm extended out, hovering and slowly moving in front of her, her index finger pointed down creating streaks in the floor in front of her. She is finger painting. Her lines take the shape of letters, words spelled backwards so that I can read them: "LOVE IS FLEETING". She runs out of space, so she pivots and faces the wall and continues writing, every-so-often dipping her finger back to the floor to reapply paint to her writing finger.

My attention is diverted as the cat meows again, this time with a feral passion that goosebumps my soul. It stands up in threatening posture, claws dug into the banister, back arched high and hair puffed out to make it appear bigger. It hisses madly and presents its sharp teeth in a demonic display of warning. It looks down at its rival, hissing and meowing in a terrifying manner as I watch in curious trepidation. Suddenly a shadow appears across the balcony, small at first but quickly grows larger, and within seconds the cat is unwarily clutched and lifted away by a falcon twice its size and ferocity. Silence is followed by horror as life once again floats in and greets me calmly, dutifully, quietly.

My girlfriend has now written an apology letter on the wall around her. Curvy lines of paint strokes forming letters and words, her sorrow permanently displayed for all to see: "LIFE IS BEAUTIFUL. I AM SORRY, I AM SAD. GOODBYE MY LOVER, THE BEST I EVER HAD". She is back to hugging her legs and knees, rocking back & forth while sobbing. Paint now stains her shirt and pants, it's also on her face and arms and in her hair. She has been overtaken, her safety zone greatly diminished. She has become one with my mistake, an amalgamation of all my failures and the hope and dreams that I created within her. I have let her down, I've painted us both into a corner and allowed no room for escape.

I watch helplessly as the paint creeps ever closer, covering first her shoes and pant legs, then spreading across the rest of her body completely. She resembles the rest of the room now, an indistinguishable corner of sadness that is nothing more than a wall and floor. Emptiness mixes with despair as I slide down to the floor and grasp my knees to my chest. I feel very alone now as I repeatedly read the words painted on the wall where my girlfriend once sat. A shadow suddenly appears on the floor in front of me, small at first but quickly grows bigger. I look up just in time to see the talons of my escape, before everything goes black and deathly quiet.
Posted by solarjinx at 2:48 PM 1 comment: