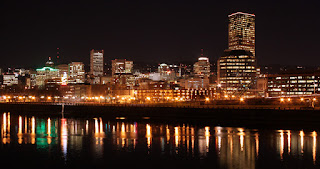 It's New Years Eve in Stumptown. The rhythmic sounds of a live band can be heard for an entire city block. The music bounces off walls and tunnels its way through the busy Portland streets. The city is alive and the sidewalks are jammed with people, young and old. Everyone is having the night of their life in their own unique way, and I am dodging puke puddles in attempt to get near the action. The girls have dressed themselves whorishly with their make-up, skimpy see-thru blouses, short skirts and stiletto fuck-me pumps. Everywhere I look I witness the sexual hustle of the female city dweller seeking a mate, willing to show the goods long before the sale is even made. This is their town, their prey grounds.. and all the combined tits and ass are merely flotsam, and the city is their sea.

The men have a feral look in their eye as they stagger across busy streets, cursing traffic and howling delightfully at anything or anyone of interest. Hipsters, punk rockers, emo's and artists, muscle heads, skinheads, potato heads and hackers. The male city dweller has a myriad unique angles, each considerably different from the other, but all with a single intent: hook-up and get laid. And the girls know this as they drink and curse too, flash their tits at passing traffic and fall down every time they encounter a curb. There is a game being played here called The Pussy Perception and it scares me terribly, so I retreat indoors where I may feel safe from the depravity that lingers outside.

Inside, the music strengthens and the bass pounds my chest. The party is in full tilt and all four bars are slammed with thirsty patrons elbowing for better positions, trying to make eye contact with the bartender. There is an electric current that originates on stage with the musicians and surges across the dance floor, intensifying as it passes from one sweaty person to the next. As the band plays on a new game begins, The Monster Mash. The youth are angry about something, possibly the rising cost of education or societal constraint, or maybe bigoted family affairs. Either way, they've decided to take it out on themselves. As the music crescendos they begin crashing into each other with force, an ebb and flow of bodies against angry bodies. A tidal wave of emotion spills across the dance floor as arms extend upward in a sign of worship and adoration. The rock stars have become gods and the kids would gladly mosh their way off the top of Portland's tallest building for them.

Deep within the chaotic center of insanity a girl's shirt has been ripped from her body, her bra barely keeping her tits in place. She is being mosh-raped by dozens of indifferent hands attached to souls charged by music. The look on her face is pure bliss, she is having the time of her life. Her cheeks are red and puffy from collisions with other faces and red outlines of hand prints can be seen on her bare chest and back. Maybe her favorite song is playing, I don't know for sure.

The night is nearing it's end, the new year is here and the band has left the stage. The party has moved out into the streets, so I follow it. A frigid temperature drop has occurred but no one seems to notice, or maybe they just don't care. Drunk chicks are passed out on cold concrete, their skirts hiked up to their hips, legs spread open in an invitation for danger. Car doors have been left open and vehicles abandoned, purses and keys and cell phones left on the floorboards unguarded. There is a strange carnal sensation to it all, to the way the city dwellers are undulating up and down the street in wave-like fornication. Limousines cruise by with its contents dangling from sunroofs and rolled down windows, screaming "Happy New Year, fuckers!" and other assorted phrases.

Cops are on the beat. Cops are everywhere. In cars, on motorcycles, on bicycles, on foot, even on horseback. Firetrucks too, with lights flashing and horns blazing, race up and down the street. The pulse of the city is completely jacked and I can feel it beating faster... faster... faster. Everywhere I look I see people, people, people. Huge groups of people hogging the sidewalks, stragglers darting here & there, people sitting, people running, people in trees, people crawling on their hands and knees. I find myself both overwhelmed and fascinated at the sight of so much nocturnal activity. Wreckless and daring, eclectic and epileptic, fueled by a sense of artistic independence, they are the lifeblood that flows through this town's arteries. This is Portland unhinged on New Years Eve.

And now it's time to go back home. Happy New Years, everyone.
Posted by solarjinx at 6:50 PM