Hello humans. I haven't been writing very much lately and I've no one to blame but myself. A couple weeks ago I decided to buy myself an early Christmas gift, against my better judgment, and now this gift has completely taken me away from my passion of writing. You see, I'm not very good at avoiding temptation. The devil would've had a lot of fun with me out in that desert. Heck, I wouldn't make it through the fasting, let alone being tempted three times by the Dark Lord. I guess that's why stories are written about Jesus and not me. Ha, anyway. Sometimes I do wish I could turn rocks into bread. That'd be badass. My stomach is growling right now and there is nothing in my kitchen to eat, but there sure are a lot of rocks in my gravel driveway..

"Ventuuurraa." "Yes Satan? Oh I'm sorry, you sounded like someone else." "Never mind the wisecracks, Ventura, you owe me rent."

So you might be asking yourself, what is this gift that keeps me from my writing? Well I'll tell you. It's a Playstation 3 gaming system. Yep, I did it, I gave in to the temptation of submersing myself in yet another alternate reality. As if DVD movies, the Internet, and creative writing wasn't enough escape from everyday life, I went and joined the masses who lose themselves in video games on a daily basis. And let me tell you something, it's a lot of fun. I got a game called Red Dead Redemption, and even when I'm not playing it I still hear it calling me away from whatever it is I'm doing. Basically it's a wild west story and the main character (me) is a horse-riding, bandit-nabbing, whiskey-drinking gunslinger who roams the land from town to town, looking for ways to earn that dollar. It's the most fun I've had since watching Sarah Palin display her ignorance during the '08 Presidential election. Yes, I'm hooked.

But fear not, fellow bloggers, I have many new ideas I want to share with you! I love writing and creating short stories, that part of me will never go away, but this whole gaming thing eventually will. I gotta be honest, a big reason I decided to get a PS3 was because it has a Blu-ray player built in. I've been wanting to go in that direction for awhile now but kept stalling, and then it hit me, I can spend an equal amount for a PS3 as I would for a Blu-ray player, so why not? I'm not the type of guy who becomes obsessed with video games, they begin to bore me rather quickly, my interests typically lay elsewhere. So as soon as I finish Red Dead Redemption I feel I'll be back in writer's mode, giving you guys and gals intriguing things to read once again.

Here are a few screenshots so you can see how gorgeous it is: 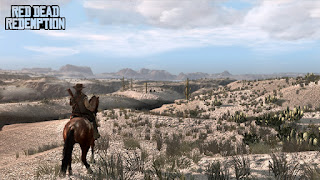 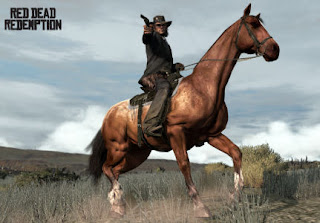 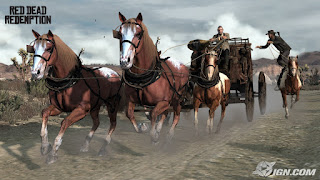 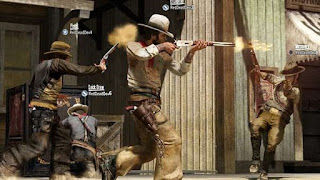 Posted by solarjinx at 1:52 PM