Pain In The Neck 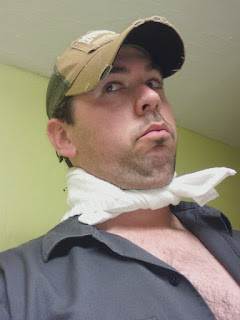 A couple sits just next to me, one vacant bar stool between us. They are celebrating something, cheering each new drink with a little more gusto than the one before. He sits in the stool closest to me, she in the other, so when they talk, her face is angled toward me and I can see the love gleaming in her eyes. She uses more than words when she speaks, she communicates with her eyelashes and her smile, her entire face leans in and delivers every syllable. These two are obviously dating. Fucking even.

He says something funny.
For some reason I feel he has offended her. She looks away and I mistake the gesture as another emotion, one of inguinal disinterest or infliction. I stare at the back of his head and imagine cockroaches crawling out of his skull, down his checkered shirt and onto his outstretched arms and legs. He has her pinned within his body, I don't like it. I pretend his arms and legs are tied to two horses running in opposite directions. Nobody wears checkered shirts anymore.

She turns back to him, laughing wildly. Her eyes are large and her lips are spread open, her head is tilted back and her throat convulses as it emits evidence of sheer enjoyment. He is a funny man, and she's letting everyone at the bar know it. We aren't privy to his jokes, but they must be really polished, because NO ONE laughs like that. Not in public.

At one point his attention turns to his drink and she fixes herself on me. He's still talking while staring straight down into his pint glass. She's no longer listening. She's looking directly at me with the same two eyes, that just moments ago, found themselves caught in a fit of hysterical action. She smiles at me and licks her lips like a girl on a commercial trying to sell me something deliciously high in calories. I'm watching her watch me, I don't dare look away. Something magnificent is happening.

Then I hear voices on the other end of the bar saying, "Maybe he's making some kind of statement? No, no, maybe he lost a bet from a friend? Haha, he toootally lost some kinda bet, that's what's going on here." There is an inaudible murmuring, followed by giggles, and then, "He looks like a fucking douche. Just ask him why he's doing it, he won't care. He's begging for attention anyway."

I decided it was time to break the seal. I had four beers and a two dollar margarita that tasted like salty spit water, I couldn't avoid it any longer. I broke it off with the funny guy's girlfriend and headed over to the bathroom. People watched me as I walked by, maybe hoping I would stumble and create something new to laugh about. This bar, minus the couple sitting next to me, was a stage full of bittersweet actors.

I found the bathroom, and then the stall, then I moved to the sink to wash up. Looking in the mirror, it was then that I remembered I had sprained my neck trying to move a couch earlier that day, and upon dealing with the pain I decided to wear a large Bengay patch around my neck. The sticky patch didn't do so well against my hair and oily skin, it kept peeling off, so I tied a rag around my throat to keep it in place. I had several drinks before leaving the house and forgot all about it.

It turns out she wasn't into me after-all. And it turns out, he really was funny.
Posted by solarjinx at 8:08 PM