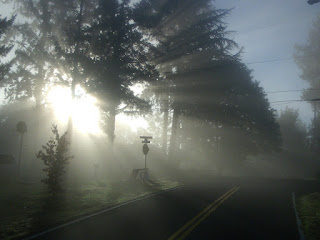 My morning began with the above picture. I was driving along in my garbage truck when I crested the hill and saw the sun lighting everything up, it was all very stunning. I snapped a quick pic with my camera phone and continued on. It's times like these that remind me why it's so nice being a human... no other animal can appreciate such a sight (or can take a pic of it with a cell phone).  Take that, you backwoods badgers! Score one for the home team.

Speaking of animals, my lower half housemate decided the house we live in needed to be bug bombed. When he brought this up I was dead set against it right away. I did not want my half of the house to be doused by chemicals, nor did I want to go through the trouble of protecting all my stuff (i.e. dishes, DVD's, TV, clothes, bed, bathroom supplies, furniture, etc). I told him to spray his half and leave me alone, I like bugs. Heck, I write poetry about them! But he said if he sprayed and I didn't then all the bugs would just migrate north into my place. Grrrr! I figured he was right about that, so I caved in and we bombed this bitch just the other day. 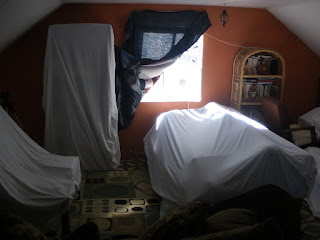 So now I'm living in a post bug-bombed apartment and everywhere I look I see little dead creatures. I can tell by looking at them that they were completely caught by surprise. The chemical attack was swift and effective, they died so quickly that their stupid little bodies are still in positions of escape. One dead bug I found had just begun to climb up a wall, its body bent and etched in time. A line of ants from a wall crack to a crumb left on the floor, dead before they could even break rank. I look around and I'm reminded of the inhabitants of Pompeii that were found thousands of years after Mount Vesuvius erupted, completely destroying the town and killing everyone so quickly their bodies were preserved as they were at their time of death. That's some crazy shit, no?

For the past two months I have been giving 2/3 of every paycheck to pay off my past debts. It's been a struggle having to drink Bud Light instead of good local home brewed beer, or going to the bar three times a week instead of five. I still kept buying my Beefeater gin, though, because that's something I refuse to skimp on. But now I am happy to announce that I am absolutely debt free! That's right, as of today I owe zero dollars to anyone at all. I will never again buy shit that I cannot save up for. I will not fall into the American dream bullshit that gets dumped on us from birth, that same dream that suffocates us financially and binds us to the 9-5. With every major credit purchase we become slaves to the system, slaves to our employer, slaves to ourselves. Well not me, never again. I have a job that I like a lot, I make great money, I am treated well... but the idea that I can drop it all at anytime and go anywhere I want is the best feeling in the world.

Not that I ever let my past debts stop me from doing that anyway, lol. But I'm just saying..

Alright my friends, it's Friday night and I don't plan on sitting in front of this laptop any longer. I had more things I wanted to discuss, but it will have to wait. I'm on my third vodka tonic (I know what you're thinking, what happened to the gin, man?) and I'm thinking a few games of pool are in order. So I will bid you farewell and catch up with you again soon. Until next blog...
Posted by solarjinx at 6:54 PM