All In A Days Work 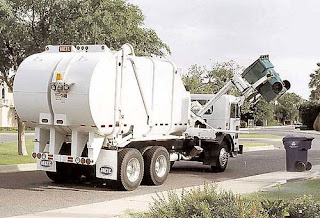 I've come this close ---->     <---- to almost snubbing two people within the past month. Now before your beautiful mind jumps to it's own conclusions and prematurely labels me as a sociopath, allow me to explain. I am a garbage man, for those of you who didn't know. I drive through neighborhoods every day, in a big truck that has a mechanical arm attached to the side. When I pull up next to a garbage can I use my left hand to operate a joystick, which in turn operates the steel claw (arm) that extends out of the side of the truck and grasps the can. With a few simple hand motions I can raise the can high above the hopper (area that holds the trash) and dump the can's contents inside. Then I simply lower it back down to the sidewalk and proceed to next can. Viola! I'm a garbage man.

By now you're probably wondering what this has to do with me almost squashing two human lives. Be patient, turbo, I had to set the scene. Now that you understand my role as a trash picker-upper I can further explain my story. Take the aforementioned knowledge I just gave you and come with me. And please, be polite to others as you read along. There's room for all of us in here, no need to get cranky.

It's Tuesday and I'm driving along a somewhat busier street than normal. Typically if I'm inside a neighborhood traffic is minimal, but this street was a major connector between two areas, a well-traveled through way, and it was that time of morning when everyone is hustling to get to work. So I'm humping along, can-to-can, watching my mirrors as I go. Everything is normal, cars are zipping by beside me, the morning is warming with the rising sun. The Joe Rogan Experience podcast is playing in my iPod and I'm listening to him rant about ancient civilizations and the history of language and what role it's played in the human race. Pretty heady topic for first thing in the morning, but that's how I roll.

Then in my right-side mirror I notice a bicyclist about two blocks back, he's headed in my direction and gaining fast. On this particular street there is no bicycle lane, just street and sidewalk. He's cycling in the street close to the curb and now he's about a block away from me. I keep my eye on him as I move to my next can. Big trucks have blind spots, but I know my truck well and I pay good attention to my mirrors, back-up camera and surroundings. In addition to blind spots, my truck has another hazard that other big trucks don't: that mechanical steel arm that I mentioned earlier. This is the last thing on the bicyclist's mind. The only thing he sees is an enormous obstacle ahead that he needs to get around and he has one decision to make: whether to pass me on the left or the right.

Vehicles have it a little easier, they can only pass me on my left. They don't have the luxury of riding up onto the sidewalk when the going gets tough. The bicyclist, however, does. I'm aware of this nifty little trick and as he finally gains on me I have a garbage can in the steel arm and it is high above my truck in the dump position. I study my mirrors to see if the bicycle guy is going to stick to the street or the sidewalk. I see him lean left and veer out into the street, it's a fine choice, so I twist on the joystick and bring the garbage can back down to the sidewalk. In the four seconds it takes for this to happen, the bicyclist had changed his mind and decided to take the sidewalk. The next thing I see is him whizzing beneath a 3,000lb steel arm on its downward descent. I missed him by INCHES.

I sat there for a moment, bewildered and stupefied. You have to realize that the mechanical arm comes down with such great force, had I actually clipped him in the head chances are he would've suffered severe skull damage that more than likely would've ended his life. And I would've had to finish out the rest of my life trying to cope with the fact that I accidentally killed another human being. People, use your brains out there, that's all I'm asking. And be patient too. Time is a true beauty, cherish it, and I'm not talking about the time you see on your wrist watch, I'm talking about the time we spend doing the things we love, or with the people we care about. In short, don't play limbo with a garbage truck, okay?

Whoa I just spent a lot of time on that, and it's only the first half of my 2 part story. I'll tell you what, since I know how valuable your time is I will summarize this next event in a paragraph or two. I'll keep it simple so that you can get back to doing the things you love! Am I not the most generous man on the planet? I know you love me, calm down.. and please, stop humping my leg.

So this next story is for all you parents out there. I'm not a parent, but even I could do a better job than the two mothers in this story. Same scenario: I'm in my garbage truck going can-to-can. This time I'm deep inside a closed neighborhood, zero traffic. Up ahead there are two moms walking and talking together and with them are their two very small children. The kids are both riding on plastic big wheels. All four of them are on the sidewalk and as I get closer the kids get excited and start zig-zagging around the cans. I've caught up with the children but the mothers have walked ahead by about a house length. I'm next to the can I need to dump, but I can't dump it because the kids are parked right next to it. I shoot a look at the mothers and they call to the little boys to move. They do move away, but not very far. I dump the can and move on to the next. I shoot another look at the moms, they yell at the kids.

By now I'm furious. These mothers don't have the presence of mind to remove their kids from the sidewalk long enough to let me pass. Instead they allow their boys to ride very near my danger zone. I look at the moms with a stern face and I motion with my hand to get those precious little monsters far away from my truck. Finally they get the message and they walk up next to a garage door and call their boys up. All four of them are now lined up at the top of a sloped driveway that angles down to the street. The boys are still on their big wheels, but at least they're at their mothers' heels. Capitalizing on the moment, I hurry and dump the can. As I am in the downward motion and the garbage can is returning back to the sidewalk, one of the boys decides to unleash and pedals down the driveway. Before I know it, he's suddenly right back in my danger zone. Unbelievable!

Unfortunately these two close-calls are just a day in the life of a garbage man. We have to always be on the look-out for things like this. Children, adults, bicyclists, basketball hoops, parked cars, moving cars, mailboxes, etc. I wouldn't trade any of it though, I really do love my job. Maybe in another blog I'll explain why being a garbage man is such a kick in the pants. It's pretty much the best, last remaining middle class job in America, and I'm lucky to have it.