Alien Babies Wrought Against This World 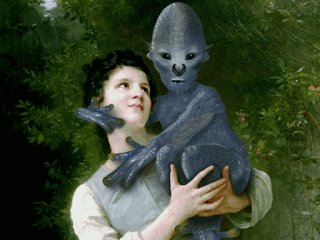 I remember everything became very small; tiny little pieces of a disorganized life fell from shelves and crashed onto the ceramic tiles below. The sound of fragile things shattering all across the floor woke my mother, who appeared in the entry way with her auburn colored robe wrapped tightly around her, her hands tucked somewhere inside of it. I could see her breasts pressing through, they matched her eyes. Her hair reminded me of snakes fucking, I wanted to run away.
"What is this all about?" she asked in a sleepy monotone voice. She took two steps into the room and her foot made contact with a shard of broken dream. "Goddamn it! What have you done now?" she shouted as she bent down to inspect her wounded sole. It was bleeding, we both knew it. The light from the pantry window shone through just enough to reveal the red around her toes, her life was spilling out onto the floor.

I was nervous, I didn't want to move. I figured if I stood still long enough she might forget I was ever part of this. I remembered when I was younger, maybe 16 or so, I took a shit into a zip lock baggie and wrote "German Chocolate" on it with a black sharpie and mailed it to my cousin in Jersey. To this day he still brings it up at family reunions. Some people cling to memories as though they'll never make new ones. Maybe it's not that, maybe they're afraid they'll never be able to outdo the ones they already have. It's possible, I have a few that are record setters, for sure.

"I accidentally let a pile of dishware fall through my fingers. I'm sorry, mom, I really thought I had them grasped pretty well. Sometimes things still find a way to get loose, you know? I think we're only down a plate or six, it's not as bad as it seems, I'm sure of it. I've been witness to worse, honest." I proclaimed as she stood upright and flicked a shard of glass into the sink near her.
"I'm going to hurt you, boy. I'm going to use some of this broken dinnerware to slice you up into stupid little pieces. You sicken me. I didn't give birth to you, an alien did. An alien from a far away planet flew all this way and birthed a stupid little reject, and that reject is you. Do you understand what I'm telling you? You are the offspring of a degenerate alien race that got lost and fucked an earthling out of despair. That's why you break dishes all the time, you have alien blood running through those dainty little alien fingers of yours, you can't grasp well. Humans can, though. Humans can be good little boys for their mothers." She was standing almost directly in front of me now. Her breath smelled of Irish whiskey and her eyes jaunted in their sockets, a trembling affair, to say the least.

It was difficult for me to believe that this could be happening all over again. Last year, on my birthday, almost the exact same ordeal took place. Only then it was a crate full of underdeveloped kittens, some of them were cute as all get out. 2 out of 6 lived, so I wasn't sure what all the fuss was about. I was treated like a such a child then, I never understood that. Yeah, so some of the kittens died, so what, it happens. I'm 41 years old for Christ's sake, and still she treats me like a child! Maybe she's right, maybe I am an alien baby. Maybe one day I will use my ray gun to eliminate everything that threatens my well being. Maybe... one day... maybe.

I'm not sure why I wrote that little piece of fiction, it sort of popped into my head as I sat down and started typing. It appears that I have a tendency to write passionately about the painful side of life. I think maybe my purpose as a writer is to dive in deep and go places where many people are too uncomfortable to go. Fact: humans hurt other humans all the time. We wound each other in ways that sometimes last forever. I like to write about those wounds. I like to put faces and names and stories to the heartache that we all know is out there. I realize I'm not the easiest writer to read at times, but as long as there are scary mothers out there like the one in this story, I will write about them. Same goes for other scary humans as well. It is my duty to let the worms crawl through the mud.
Posted by solarjinx at 9:20 PM