I'm spending my July 4th indoors relaxing, meditating, listening to Snatam Kaur. Over the past several weeks I have put my body and mind through too much, I try too hard at too many things. I have the constant thought that tomorrow may be the end, so my brain works overtime thinking about all the things I haven't done yet, or the beauty I've yet to see. This is especially burdensome when trying to sleep at night, lots of restlessness and tossing and turning, staring at the dimly lit ceiling while the chatter in my head continues throughout the night. I think I need Ambien. Or a heavy hammer. Either way.

I've noticed lately when I write I have to frequently backspace and correct simple mistakes, like switching two letters around or misspelling easy words. So today I meditate, calm the brain, soothe the soul. Iron out the wrinkles a little bit. I need a reset.

Technology amazes me, even the simplest forms of it. Take music, for example. Right now I am listening to music via iTunes on my laptop and I'm listening through my ear buds. Once upon a time, for a human to listen to and receive music, he/she had to be in the presence of another human(s) who could perform said music, but not anymore. Now a band/artist that I've never seen can make music in a location thousands of miles away, record the sounds into a machine, place those sounds onto a piece of plastic or upload them to an invisible realm called the Internet, and I can obtain them without even leaving my living room. Then I can force that music from my computer through a skinny black wire that leads directly into my ears where I can then enjoy the wonderful sounds that were produced so far away. I'm holding the wire in my hands right now and I'm imagining the music traveling through it, I'm picturing the energy flowing and buzzing in and around it, and I see little people inside the wire running quickly with their instruments from one end to the other, giving me what I want to hear. It's all so very amazing, really. And I am such a weirdo for thinking this much about it, lol.

So yesterday was a lot of fun and I should tell you all about it. It started early, I awoke and headed downtown to Salem's Saturday Market to sit beneath a canopy with my housemate. He's a glassblower, not sure if I talked about him yet, and it was his debut at the Saturday Market. I got there shortly after 9am and we talked and people watched and cracked jokes all the way to 1 o'clock, which is when I had to cut out. In that time frame he sold $120.00 worth of art, not bad! I bought a wonderfully adorable blue puppet for my nephew from a neighboring booth, which I'll be sending to him on Monday. (cuddlycritterpuppets.com) 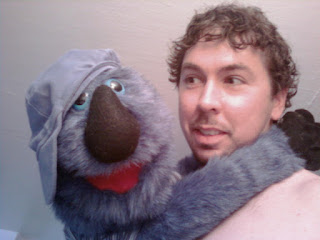 Then it was off to Ringo's to practice my pool table skills. I had lunch there, hot ham & cheese and a salad, a few beers, and shot about 8 games of pool with the bartender (and new friend) Rebbecca. She's on the league, so when I play with her I play for FREE! Bonus. We are evenly matched which makes our games even better, although I must say I won every game we played except one. I'm not saying anything, I'm just saying. If she were writing this blog it might read otherwise, but she's not, so instead you get the truth!

After playing pool a group of us decided to go play 9 holes of golf. These are new friends I just met and they were kind enough to invite me along. I hadn't swung a club since last year's garbage man tourney, so naturally I was hitting balls all over the damn course. Anyone listening to me that day would think my favorite number is 4 as often as I yelled it. Here's an example of just how bad my shots were: 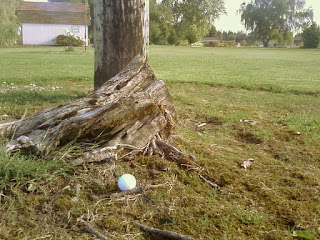 You can't see the flag because it's directly in line with the telephone pole, lol, which means my next shot was somewhat fucked. The entire day was, really, but it didn't even matter. We were out in the sun enjoying the warm weather, laughing and having fun. We decided early NOT to keep score, which was a fine idea in my book.

The course we played was ghetto, I'm guessing you already figured that out when you noticed a telephone pole, a stump and a wood shed all on one hole. Well if those didn't persuade you maybe this next pic will: 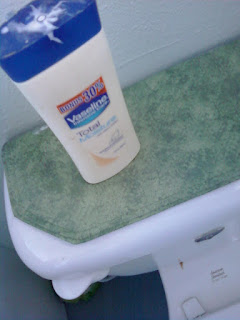 Of course I won't leave you, dear readers, with that horrible image in your heads. I will finish this blog by showing you a picture of the dinner I had, which was a great ending to an even greater day. I stopped in at Sushi Town in Keizer, Oregon where you sit at an actual sushi bar and order from the chef who stands in an elevated area in front of you and slices up your order. He then hands it down to you and this is what my plate looked like: 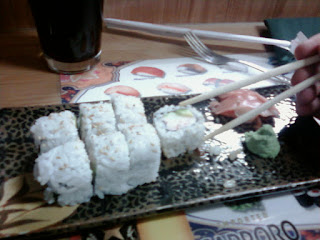 I'm not well learned in what's good & bad when it comes to sushi, so I played it safe and ordered the California Rolls, which I know I like. And mmm baby, were they deelish! And cheap too, only 4.75 for the plate. I'll be going back there often and I'll get better pics of the restaurant for you to see.