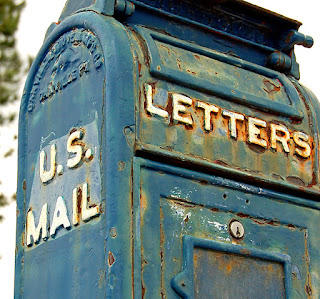 "I'm so hungry right now I could eat my right arm and possibly part of the left." Edgar thought as he staggered along the sidewalk that joined Center Street. It was a typical Saturday night in Salem, wet and unyielding, a displeasure to the senses. The entire consciousness of the planet spoke to him as he walked on, buzzed by a local home brew offered to him earlier that night. Just ahead a cat darted out from behind a dumpster and tore off across the street, nearly flattened by oncoming traffic. Edgar watched as a blue Nissan skidded slightly in response to the instinctive (but wrong) brake tapping on wet roads. The driver, unaware of the proper actions associated with safe driving, freaked out from the sudden loss of control and over-corrected by steering sharply to the right, which sent the sedan bouncing onto the sidewalk and into a United States Post Office mailbox. You know, one of those big blue ones, sturdy steel bolted four inches into the concrete.

"Jesus lord and mercy" Edgar said as the driver's door opened and a lady stepped out to inspect damage. The day's rain had turned into a simple drizzle, and now the mixture of fog and mist that hung overhead created a noir effect in the streetlamps that illuminated the scene. She wore a white tube skirt that she didn't bother adjusting as she exited her car. She walked to the front and stood there looking down as the left headlight shone brightly, reflecting off the metallic blue of the mailbox, creating a lovely silhouette of her body on the brick wall next to her.

"Jesus lord and mercy" he thought again, while noticing the wrinkles in her skirt that needed patted down and the sideways shift of her blouse that revealed the disorder of her given situation. She was magnificent and bewildered, an angel hovering above the tragedy. God sent the cat across the street and now Edgar was enamored by this creation of chaos. She didn't even know he was there, as he fished a smoke from a pack of cigarettes in his shirt pocket and put one to his lips. He tilted his head to the left and cupped his hand over it as he thumbed the flint wheel of his lighter.

The sound startled the girl and she turned around. The swoosh of intermittent wipers across a semi-dry windshield created a squeaky dragging sound that startled her yet again, causing her to jump just a little. She was a glorious mess, aggravation and uncertainty clung to her face as she stared into Edgar's eyes. Her car was still running and the cat had long since disappeared into the night. "Fuck I could use a smoke, I just hit a mailbox!" she blurted as Edgar exhaled and handed her his cigarette.

She eagerly accepted and put it to her mouth with a trembling hand. Her other arm curled across her belly and supported the elbow of her smoking arm as she stood there looking on, "Thanks for that, I mean really. I gotta get off the sidewalk, this is no place to park a car." Her eyes were searching for something, maybe a sign of acceptance or trust, or a glimpse of humor or complexion. Edgar remained unflinching for a few moments longer, then he suddenly let loose a roaring laugh that erased all sensibility. Time slowed down and watched as a girl and boy stood on a sidewalk together, two strangers meeting for the first time under uncommon circumstance. His laughter had triggered something inside of her, and she too began laughing.

"Why are these damn things even still around? It's twenty-ten for God's sake! Everyone uses email to send letters these days!" she managed to say between fits of uncontrollable laughter. "And look, it didn't even budge. The damn thing is really in there!"

The laughter continued for another minute and eventually Edgar was able to reply, "It's the one branch of government they swear works well, they wanna make sure they got 'em secured to the sidewalks to prove their theory." More laughter followed with the sharing of the cigarette between them. They smiled at each other as she tossed the spent butt onto the ground and Edgar smashed it out with the heel of his shoe. "My name's Edgar." He reached out his hand and she shook it. Her hand was no longer trembling, it was warm and polite and inviting.

"I'm Heather, thanks for making all of this more amusing. I needed that." she said as she turned back towards the wreck.

"Your car is okay, Heather, barely a dent. You basically gave it a kindergarten kiss with the mailbox." Edgar replied as he walked over and squatted down for a closer inspection. Her waist was next to his face as he dazed into the hazy headlights. The consciousness of her inner being whispered to him from within layers of tight fabric and woven advertisement. She was dressed to impress and all of the lustful thoughts from earlier in her night still followed her. She stood there with the stare of a dozen men still lurking, still waiting to be let in. Her body is a firework ready to explode in an array of dazzling colors, ready to light up the nighttime sky. She drives through life with power, persuasion and purpose, but is unsure of herself behind the wheel. She wants someone else to lead her, to take her by the hand, to drive for her so she doesn't end up crashed on sidewalks.

"Well I gotta get home still, this wasn't a planned stop. Do you need a lift somewhere, Edge?" she asked with a wink and a smile as he stood and straightened himself.

He stared at her for a moment before answering, "You are the most beautiful wreck I've ever seen. Tonight I learned about love and mailboxes, and how both are going to be around for a very long time. I saw a cat dance with death in a wet Oregon street, and time stand still for two strangers. I saw one man's journey intersect with another girl's beauty and I'll always remember tonight, and the way your lights brightened up this street for an evening, and how we laughed when we could have cried. I saw a friend on either end of a cigarette, smiling from their hearts. I saw a blue car parked sideways, begging to be rescued. I saw an angel exit and unfold her wings and a man simplified within her shadow. Go home now, Heather, be safe and remember tonight forever."

A tear formed in her eye and she began crying. She leaned forward and kissed him on the cheek and said, "You were wrong about one thing, dear.. the tears." She smiled lustrously and climbed back into her car. She put her hand up to the glass and through the foggy window she waved goodbye using just her fingertips as she reversed out onto the street and then sped away.

Edgar stood there for a moment taking in the brand new silence. Within minutes he could again hear the voice of the planet and the minds of a billion others getting busy with life. Satisfied, he turned and walked past the mailbox, continued down the sidewalk and disappeared into the night thinking, "Damn, I'm still pretty hungry."
Posted by solarjinx at 8:26 AM