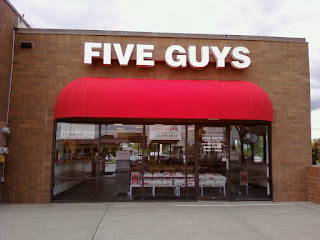 We're getting a Five Guys Burgers And Fries here in Salem and I don't know why, but I'm a little excited. I try hard to steer clear of fast food, but after seeing multiple businesses leave Lancaster Dr, it's kind of refreshing to see one move in. The place looked very open when I drove by yesterday, so I stopped and went in. I was quickly greeted by an older gentleman (probably the owner) in a Five Guys t-shirt who promptly told me the grand opening wasn't until Wednesday. I said, "Okay, but yo mama told me differently last night." He stared at me straight-faced, unamused. I don't think he's aware that Yo Mama jokes NEVER get old. EVER. Sigh..

Another new business opened up downtown, and this place I'm truly excited about. It's called Clockworks Cafe and it's going to be a happening place once it gets its shit together. The interior design is fantastic, very clean and artistic with a town centre feel to it. Giant clocks on the walls and street lamp posts placed throughout really make it great, I love it. There's a lot to this place, I'll try and snap some better pics of the interior and post them in a later blog, but for now: 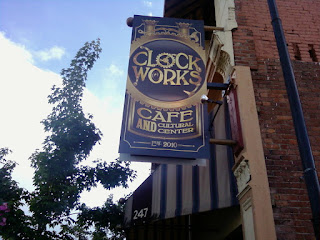 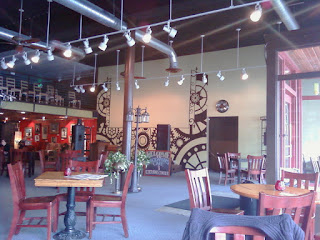 Posted by solarjinx at 5:19 PM