I have left Oregon. The Pacific Northwest is no longer my home and the snow covered mountains I grew so accustomed to seeing every day no longer punctuate my horizon. In December of last year I made the decision to move back east. I quit my job of ten years and said goodbye to dozens of friends I made in the decade that I lived there. It wasn't easy this time. Over the course of my life I have relocated many times and experienced many fare thee wells, all of which were relatively easy for me, but this last time around wasn't the same. Something changed. I think the man I was learning to become allowed himself to grow closer to the friends he made. The goodbyes were difficult and four months later I find myself missing them and thinking about all the fun times I had with everyone. Fuck all, I miss Oregon and my people.

So, what am I doing now? 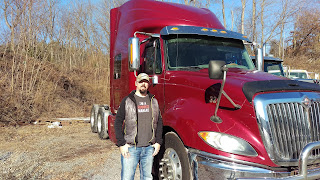 Driving a big rig all over the place. Mostly up and down the east coast, but dispatch knows I'm willing to go anywhere in the country if the load pay is right. I bought this rig off my dad which means now I am a small business owner, which translates to: I am now adulting on expert level mode. I flipped my life completely in an opposite direction. I went from living a simple, stress free lifestyle to one that resembles an 800lb bluefin tuna fighting at the end of a deep sea line & hook. I feel like I bit off more than I can consume.

I obtained my CDL (commercial drivers license) via a tour bus company 15 years ago when I lived in Pennsylvania. I used a shitty school bus to pass the driving test and then immediately started driving people all around the US and Canada on vacations in a 55' luxury coach tour bus. That was a fun time, not too stressful. After that I moved to Oregon where I became a garbage truck driver. Honestly, I've never had an easier job. Automatic straight truck on a set local route, nothing complex about it. For a tiny moment I learned how to drive a 10 speed semi hauling garbage to landfills and that was my first taste of driving a big rig, but little did I know what I'd be getting into later. Fast forward to now times.

I purchased my dad's 2009 ProStar International truck without ever having sat in it. I've never been a trucker. I had no idea what truckers do. When I got to PA my dad gave me a two week crash course on how to be a "real" truck driver. Suddenly I found myself immersed in a world that I did not understand. Real truck driving is nothing like I had ever experienced prior. Real truck driving is hard, harder than anything I've ever done. I'm now in my fourth month of driving and every day is still a challenge. My biggest hurdle by far was/is learning how to shift a 13 speed. I've been driving manual vehicles since I was 16 but that did nothing to prepare me for shifting a big rig. It's way different. I hate it.

My life is radically different now. I no longer get off work around 3 every day and then go play or explore or hang out with friends or drink or write poetry and stories. I don't get to do that stuff much anymore because trucking isn't just a job, it's an entire lifestyle. It occupies most of my time, day and night. And when I do finally get some downtime I have to use it to grab a shower and eat and sleep. I squeeze those things in when I can and if I have any time leftover, then I can pull out my laptop and write something or watch a movie or read a book. But honestly, I can feel the creative writer in me dying. I'm no longer living a free and exciting life filled with people and experiences and stories, so my inspiration is running out and so is my muse. I guess the good thing is that I'm drinking way less now. I used to drink every single night and now it's few and far between.

I don't have plans on turning this site into a trucker blog, but I'm sure from time to time (when I actually get time) I will be writing about trucking stuff since that's what's happening in my life now. I'm hoping to eventually settle into this and find a way to keep writing creatively. That last story that I started was exciting to me and I would love to jump back into it again. The characters are waiting for me. They have shit they want to do! It's weird to think that their lives depend completely on me. I can bring them to life on paper and make them do things or I can abandon them where they currently are and leave them dangling forever in limbo. Writers are gods, did you know that?

One last thing then I'll post this. One of my main reasons for moving home was to be close to family again. I have nephews and nieces whom barely know me and I want to be cool uncle Mick. I'm enjoying getting to know them and being a part of their lives. It's something I've kind of avoided my whole life. I've never lived close enough to be a solid part of my family and now I am and it feels good. I know what you're thinking and yes it kind of defeats my purpose of being present in their lives while being an over the road trucker, but I do get home to see them way more now than I did living 3,000 miles away. So stuff it!

Okay, that's all for now. Hopefully I'll be back soon.