Here I am sitting at my keyboard once again, staring at specks of grit trapped between keys, staring at a trove of capital letters waiting to be pressed. It used to be when I sat down to write I got excited about visiting that special place inside my mind where creativity flows and ideas flirt with words that give birth to sentences. I don't do that much anymore, as you well know. This is a tragic state of unbearable being, an abstention of balance that creates pockets of sadness all throughout the land. Many a wizard have appeared before me proclaiming that if I do not get "my shit together" that this planet will be in peril forevermore. I understand, I really do, and I'm trying to focus, you have to believe me. I do not want to bear the burden of planetary subversion, nor do I want to witness the nothingness swallow us whole, so I will get back to writing, by god! And this is my attempt.

What has kept me silent, you may ask? Several things really. First off, I'm pretty happy and content with my day-to-day. I love my job and enjoy the people in my life. My bills are paid, I have no debt. I can go on long camping hikes in the beautiful Oregon wild. I enjoy the company of my girlfriend and look forward to every moment we get to hang out. She is a field of fireflies seen for the very first time, not a day goes by that I don't appreciate the fact that we're together. I'm also pleased with the changes that clicked inside of me to pay attention to the foods that I eat and to care more about my health. When I look back and think about all the aspartame, MSG, HFCS, red/yellow/green/blue dyes, nitrites/nitrates, rBGH, etc, that has been sludged through my body, I cringe and wonder why it took me so long to give a damn. As I progressively get a better grip on this whole "eating healthy" thing, I find that I'm beginning to feel cleaner and clearer than before, and god willing, I will sidestep future diseases that I was lining myself up for prior.

So, it would seem being happy in life tends to squish the depressed, pessimistic writer types. Happiness is the folly of a fractured soul, you see, but that's not my only problem. Another peculiarity that has kept the writers bug at bay is my insatiable quest for truth and learning. I am seriously addicted to podcasts. I cannot get enough of them! I think a big reason why I can't stop learning about all the goings on of the world is due to the fact that I didn't care about anything growing up. I was just a basic 90's boy who spent his paychecks on bass speakers, amps and Dr Dre CD's. Sure I read books, but only fiction, never anything serious. I skated through the first portion of my life never having voted or cared about what politicians were or did. Up until my 30's, I couldn't even tell you what the three branches of government were, let alone what a filibuster or constitutional convention is. I've been on a fast track playing catch up on all the stuff I should've been paying attention to all along: history, politics, current events. That being said, it's time to discuss the real reason for writing this blog entry tonight.

When 9/11 happened I was 25 and living in North Carolina. I remember watching the towers fall on TV and hearing the news anchors mention words like "terrorism", "the middle east", "Osama Bin Laden", "anti-western sentiment". I remember thinking how I knew absolutely nothing of what they spoke of, and wondered why anyone would want to fuck with us over here. I mean after-all, we're waaaay over here and they were waaaay over there, for Pete's sake! I simply thought we were just chilling out on a big landmass surrounded by oceans, not bothering or being bothered by anyone else. Boy was I wrong. Fast forward to present day America. In this paragraph alone I have already used four or five red flag words that have alerted an algorithm that has placed my blog into the ATTENTION category of some governmental computer system. If I had said this to you 6 months ago (which I did) you would've call me a conspiracy cook (which you did), but with the recent whistleblowing reports hitting mainstream media of the NSA spying on everyone via everything, I no longer feel the need to explain these things to you. Instead, I want to discuss it from a different angle: why should we care?

This is the question I keep hearing: "Okay, so the government is keeping files on us, so what? Why should I care? I'm not a criminal." Yeah, I hear ya, and I'm glad you aren't a criminal, but let me ask you this: if a stranger came up to you on the street and struck up a conversation with you and you got to know each other a little bit, would you add this person to your Facebook friend list when you got home? If not, how soon would you? A second encounter, maybe a third? When do you consider a complete stranger a friend? And even then, would you allow that person access to every part of your profile and life? i.e. honeymoon pictures of you in lingerie, pictures of your children naked in the tub, websites you occasionally visit when you think you have the house to yourself, phone calls to your lifelong best friend during times of distress, intimate moments in the bedroom with your lover, the password to your email, the password to your online banking, etc. Most people wouldn't want anyone to see this stuff, especially a complete stranger, and even more-so, a criminal. Well, I hate to be the one to break it to you, but the government is both a stranger and a criminal, not your friend.

We now live in a country that is ruled by a power-hungry group of people who DO NOT CARE ABOUT YOU. No matter which political party is at the helm, the three constants that never falter are: MORE CONTROL, MORE CORPORATE INTEREST, and MORE GEOPOLITICAL WAR. They are not public servants, they do not have our best interests at heart. They dangle a GMO carrot in front of us and then hit us with the stick. We currently have a President (whom I voted for in the first election) who ran on hope and change, who promised to abandon the war mongering ways of the previous administration, and instead uses the Espionage Act to go after whistle blowers and uses drones to assassinate American citizens overseas. If a Constitutional law scholar sees no wrong in this, then I fear the government he controls and I'm definitely not okay with it spying on me and recording every detail of my online presence, red flagging key words I write in blogs, compiling a folder on me and storing it for future use. I mentioned the NSA data center being built in Utah way back when I first read the article and I said, "You don't build a 2 billion dollar data center and not use it." I mentioned the growing police state time and time again and said, "You don't build a police state and not use it." Eisenhower warned us about the military industrial complex in his farewell address in 1961, and again I say you don't build it and not use it. The government doesn't gain power and then relinquish it. Ever. This is a forward momentum in the wrong direction and it's gaining speed like we've never seen. The most powerful military this planet has ever seen is in the hands of a government that wants (and has now achieved) total domination over its citizens. That creates a scary future.

If you haven't seen the foreign film The Lives Of Others, I recommend you watch it first chance you get. It's an outstanding glimpse into what life was like living under constant surveillance in East Berlin circa 1984. As a 1/4 Jew and a writer, the idea of a government singling out certain sects of society and doing with them as they see fit is especially unsettling to me, and after watching this film and noting all the similarities to present day America, you should be equally alarmed. The movie opens with a printed introduction that reads:

"1984, East Berlin. Glasnost is nowhere in sight. The population of the GDR is kept under strict control by the Stasi, the East German Secret Police. Its force of 100,000 employees and 200,000 informers safeguards the Dictatorship of the Proletariat. Its declared goal: "To know everything".


In reading the above intro, I can't help recall President Obama's many speeches about transparency and an honest and open Congress that will be held accountable by the people. That's what glasnost was, and much like in Germany, it's nowhere in sight here in America either. And as for the Stasi's intended goal to "know everything".... well, let's go back to 2002 when America was still in a mad frenzy due to 9/11. Then DARPA director Admiral John Poindexter headed up something called The Information Awareness Office (IAO). What was the intended goal of this program, you ask? To achieve "Total Information Awareness". For fuck's sake, just look at the seal they chose, they were basically shoving their plan of total dominance right up our collective asses and we merrily let them: 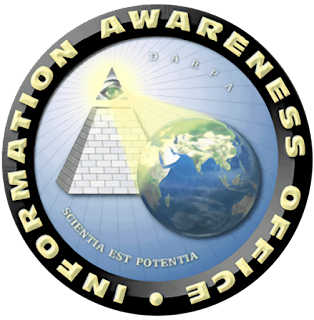 If you are still having trouble seeing the parallels I'm drawing for you, then I just can't help you. My suggestion is to cancel your cable, stop watching mainstream news (all of them), stop believing that your political party is the answer to our problems, and begin your very own unfoldment process. Seriously, We The People need you to get your shit together, and so do the wizards.

In closing, I'd like to go back to the topic of drones and make a comment. I had a very short conversation with someone the other day about drones and didn't have the chance to fully articulate, so I will here. I'm not against the use of drone warfare, I'm simply against certain methods we use in determining whether or not a human being should become a target. For example, we do "signature strikes" on people who look nefarious, or are doing something that appears militaristic, or who are traveling near or through areas we consider hostile. We also perform "double taps" which means, after killing the initial target we wait for first responders to arrive and drone attack again. I am not okay with this, and if you are, I'm not okay with you. This isn't an example of an America that represents a beacon to the rest of the world, this is psycho-driven blood lust hell bent on keeping the machine alive.
And as for targeting United States citizens, oh boy, where do I begin? I'll tell you what, since I'm tired of writing and you're probably tired of reading I'll just let you listen to a small podcast clip that pretty much sums it up:

P.S. This article is one of the best I've read on drone usage:  http://rt.com/usa/cia-drone-strikes-unknown-targets-293/
Posted by solarjinx at 10:00 PM 1 comment: