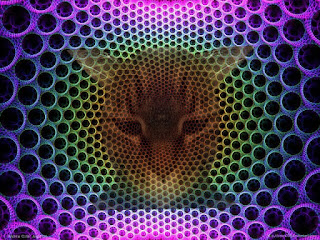 The Dream: Last night I watched a deluge of shimmering, emerald green lava flow down from a circular spot within the stars. When it touched down to the ground near where I stood, it immediately spread out everywhere and formed a river of undulating green water that flowed magically, swirling in and around my feet, but never touching me. Thousands of bright, glimmering crystals formed in the emerald flow mass as it began to suck back in on itself until it took the shape of a tube. It moved quickly now and met an invisible L-shape in the blackness to my right and went from horizontal to vertical as if pouring up the length of a wall. And then, within what seemed like a mere second, it turned into the most beautiful, sparkly green Egyptian cat I have ever seen. It wore a jewel encrusted collar consisting of iridescent space debris and sat atop a cube made of moving/flashing marquis arrows. The creature was a wonder to behold, quite god-like, and it stared at me with eyes that felt like truth and knowledge. It sat there on its haunches, unflinchingly, while it's skin swirled across it's body and it's eyes blinked in sync with the rhythm of my heartbeat. It never meowed or looked away, even as it's form began to dissolve into a stream of matrix numbers. Thousands of 1's and 0's now replaced the emerald cat, yet it's form remained true until I spoke the words, "thank you". Instantly it exploded and all the numbers rained down in falling star fashion... down, down, down into the darkness that circled beneath me where they regrouped and tunneled up my legs. Soon I was covered in 1's and 0's that skimmed across my skin like time-lapsed footage of interstate traffic in super fast-forward. I held my hands up in front of my face, I could see through them, the numbers moved so fast they blurred. There was a humming sound that grew louder as my lips began to burn. I could tell my journey was nearly over as the numbers began to flake off my body like dead skin. The humming grew louder yet, white light began to form at my flanks, my lips grew hotter. And then... awake.

So the dream is over and has been replaced with a snowy white reality check outside my window. Yes, it snowed here in Salem, Oregon, and this is what I went outside to play in today: 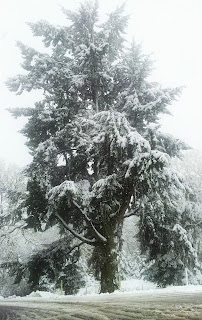 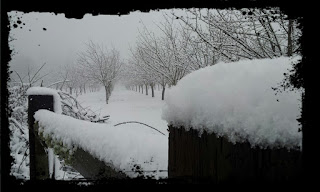 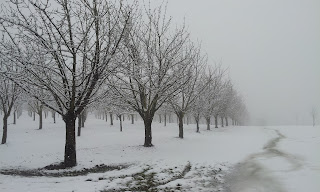 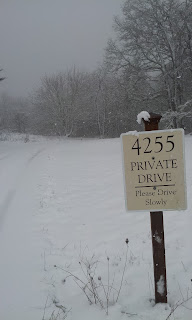 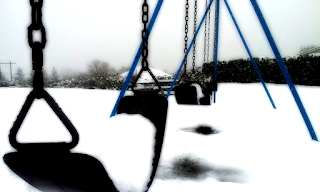 Isn't it pretty? This is a rarity in the Willamette Valley. In the time I've lived here I've only watched it snow (and accumulate) three times I think? So when it finally does come, I get a little excited. Almost as excited as when I remember my trippy dreams. That's all for now, my fellow readers and writers, and until next time... write on.
Posted by solarjinx at 3:48 PM