I was driving home from work the other day when I came upon a green Toyota pick-up truck. He was in my own lane, so when I caught up with him at the red light, I was directly behind him waiting for the light to change. He had a bumper sticker on his tailgate, just one, and it read: 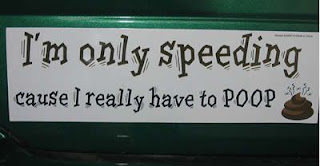 Hmm, okay. The fact that this was the only bumper sticker on this guy's truck meant that he really thought it was hysterical. I mean, come on, what's not funny about that, right? Well I'll tell you. If you are willing to display this thought to everyone who lives in your town, then at least go all the way with it. Here's real the problem with this bumper sticker: it doesn't go far enough. Yes, that's right. Here, let me explain.

Anytime you try and deliver a naughty potty joke, you're taking the chance of offending many people. Shit humor is difficult to pull off, especially when it's in the form of a bumper sticker AND has an actual picture of a stinky pile of POOP to further emphasize it. Some might say the poo pic is an example of this sticker taking it all the way, but I disagree. It only adds REJECTION to an already mediocre joke. As I sat there reading it I shook my head and refused to accept this bumper sticker as funny, and also refused to accept this guy as part of my community.

Now, had the sticker read this instead: "I'm only speeding cause I already shit my pants" AND included a picture (I'll let you use your imagination) then my reaction would have been entirely different. While I personally would never put something like that on my own vehicle, I would at least have been completely shocked and laughed in disbelief because of it, and the true intended result would've been achieved.