My Name Is Hurl

"Start off with a funny video of yourself, then lead into story." Someone once told me that was the best way to roll out a new blog, so I'm trying it here. Let me know what you think of the new format by leaving a comment, okay? Actually I'm just kidding, nobody told me that shit, I just felt like doing it. You don't have to leave me a comment either, I realize your time is very important to you in this life. How dare I try and hurdle that! Now, on with the blog.

I want to tell you a little story about a man named Stan. Stan is my age, he's married with children, and he works with me, we're both garbage men. His name isn't really Stan, I just made that up, but the rest of this story is absolutely true, so calm down. A few weeks ago Stan and I were taking a lunch together in West Salem, I think it was a Wednesday sometime around 11am. It was a typical fast food lunch, nothing special. Our conversation was mostly about chicks. No, not the feathery newborn kind with beaks, the other ones.

I think maybe at one point we talked about nuclear weapons too.

After our lunch we headed back out to our garbage trucks and stood around a minute or two longer shooting the shit. Allow me to depart from my blog for a moment, if I may. I want you, as a reader, to take that sentence I just typed, or more specifically, the idiom within it: "shooting the shit". Now, pretend you have a brain that only comprehends things in a literal sense and then picture that phrase in your mind. I see a boy with a birthday rifle out in his father's cow pasture shooting dried-up cow patties for practice, haha. But seriously, shooting the shit? What the hell could that possible mean? How did it derive and why does it mean you're passing the time? Ugh, tangent alert.

Back to my story. So Stan and I are talking some more, we're over by his truck. It's getting hot outside already, the parking lot is buzzing with cars coming & going and people hurrying to get coffee from Starbucks or groceries from Roth's. We're standing there bullshitting, when suddenly for no apparent reason I decide to ask him this question: "Stan, if I were to undergo surgery and have my penis chopped off and a vagina sewed in its place, would you fuck me?"

He looked at me for a second, eyes blinking. I could see the skin on his forehead twisting with thought as his brain computed the question. "Dude, what the hell?" was all he could reply.

I laughed out loud at the hilarity of my own question and followed with, "But seriously, would you? I mean, I would let you play with it first, inspect it with a finger or two, you know, play with it a bit, make sure it's sewed on proper." By now he was clutched over, both arms tucked in and holding his stomach, he was dry heaving. I thought he was messing around. He kept telling me to stop talking, that I was about to make him throw up. I still thought he was joking, and of course I continued to add more layers to the already disturbing topic at hand. And wouldn't you know it, Stan let his lunch out right there in the parking lot!

I felt like I just dreamed the experience, or that maybe I had walked onto a movie set and witnessed a scene being acted out. Could this be real? Did I just make a grown man throw up by asking a creatively sick question? Yes, that's exactly what I had done, and I couldn't be more proud. It was a moment I will never forget, the power of words spilling onto the ground before me. Off in the distance I thought I heard a wolf howling and the brum, brum, brum, brum of a sacred Indian ritual drum being played. Needless to say I was literally rolling on the pavement in a fit of uncontrollable laughter. I think I heard him toss a few obscenities my way before he climbed into his truck and left. I, on the other hand, had to take a picture of my prize: 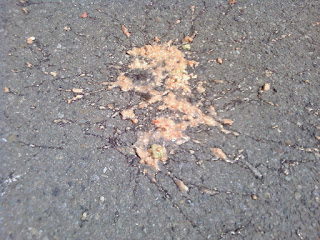 Posted by solarjinx at 7:19 PM