I have so much to say, but I will say little for the sake of what little time I have left this evening. Sometimes I wish I were jobless, sometimes I wish my only friend was the clock on the wall, tick.. tick.. ticking along, minute after minute. Just me and that clock, making the most out of every available second. Luckily I like my job, otherwise I would REALLY hate going in each day. I spend so much time thinking about how many more poems I could write, or that novel I could have written, was it not for working all the damn time. How the hell has our species come to this? Jesus, I already know the answer to that question, I don't know why I keep asking it.

So check it out, I found this slightly amusing in a cannibalistic sort of way. In my apartment I have a fish tank, 40 gallons, full of pretty plants and fish and an eel and several ghost shrimp. I tried taking some pictures of it to accompany this blog, but none of them turned out, so you'll have to find entertainment in my words alone. Can you dig it? I know you can, you waywardly word nerds. So anyway, these fish are fantastic, some of them (the platy's) even felt the urge to mate and have baby fish! That's terrific, I love looking in there and playing the "find the fish fry" game. If I still smoked weed it'd be even better, but I don't, so it's slightly less entertaining, but still quite a lot of fun. The game lasts only a few minutes instead of over a stoner hour.

Let me get back to the shrimp, those little weirdos are the reason for this blog. So like I said, I have some little ghost shrimp in there, patrolling the rocky bottom of the tank day in & day out. They're a lot of fun and they only cost me .33 a piece, so I dropped a buck and a half and littered my tank with them. Most of 'em lived. Problem is when I drop the flake food in the other fish are quick to snatch it all up, and the shrimp are left roaming the gravel in search of the source of the desirable smell. Poor bastards, they stand no chance at survival. So I bought some sinking food pellets that I toss in at the same time as the flakes. The plan works well. All teh fast swimming fish go straight for the flakes while the pellets drop straight to the bottom where the shrimp are eagerly waiting. Each one of them scurry to the nearest pellet and begin consuming their meal. Here's where it gets a little funny (and cannibalistic). This is what they are eating: 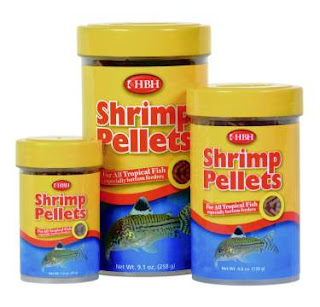 I should point out that this food isn't called shrimp pellets because they are specifically designed for shrimp, it's called that because the main ingredients are made from shrimp and it tastes just like shrimp. Ha ha, that's a little funny!
Posted by solarjinx at 8:19 PM