I do not have very good eating habits. It's not that I eat terribly unhealthy foods all the time, it's just that I have an extensive appetite and when it comes time to eat, I tend to eat large portions. If I had to guess I'd say I average only 3-4 fast food meals a month and I seldom drink soda, so compared to many Americans that's a pretty good average. My ex-girlfriend was an extraordinary cook and we always had nice home cooked meals, but she always made a lot and I would eat a lot. Excessive food intake aside, I generally stay away from really shitty foods. That being said, every once in awhile I like to drop my balls in a cup of soup and just go crazy. Today for lunch I decided to try a new product by one of America's popular fast food chains. This item is causing quite a controversy, it's being discussed on all the major news channels, so naturally I had to eat one just so I could say I did it. If you don't know what I'm talking about then take a look at this picture and I'll explain: 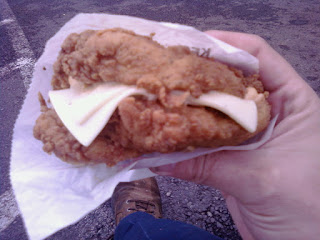 Yes, ladies and gents, that is KFC's infamous new sandwich called the Double Down. It's two of everything: two cheeses, two sauces, two bacons, and two chicken slabs pretending to be buns. I have no idea how many calories are in it, or how awful the fat content is, but let me tell you this.. it was pretty tasty. Apparently Americans just aren't fat enough yet, so KFC has taken the extreme liberty of advancing our unhealthy society with this mega-fuck thing they call a sandwich. It can't really be a sandwich without any bread, can it? It doesn't matter, this product is grotesque and nefarious and should be avoided at all costs, unless, of course, you are like me and just had to eat one for the sake of good blogging. Am I not dedicated to the cause? Hoo-rah!
Posted by solarjinx at 7:32 PM