Oregon recently passed a new law. I'm fairly certain this law is being passed in most states nationwide and if it hasn't yet in yours, give it time, it will. The new law is a cell phone restriction while operating a motor vehicle. Basically, if you don't have a hands-free device you can no longer talk while driving around in search of the nearest strip club. Now your friends will have to wait until you pull off the road before they know which direction to head. I understand the necessity of this law, too many people on the road driving around with way too many distractions, I get it, but there is another aspect to the whole thing that I am thinking about which I don't like: cops. 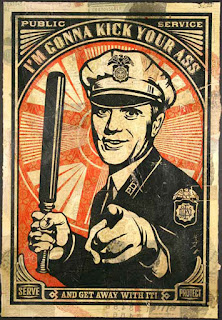 We've already given way too much power and trust over to our cops, and in return we get hassled every single day. I'm a law abiding, tax paying citizen who has been pulled over by local law enforcement maybe a dozen times in my life, and of those times I was ticketed (all but once) for trivial bullshit like: not wearing a seat belt, not making a complete stop at a stop sign, excessive rate of speed (by their standards, not mine), license plate/inspection discrepancies, lights/signals out, improper lane change, etc. The cops have set their focus on the roads, our roads. They patrol the streets with radar guns looking for the next "criminal". They hand out 150 dollar tickets for things that affect absolutely no one. Well that's not entirely true, the state's budget is affected greatly, that's about it.

So now that this new law is in place I find myself thinking about subtle things that I do while driving that may appear (to a cop on the look-out for offenders) as cell phone usage. For example, I often drive around with my left arm propped up and my head resting against my hand while steering with my right. It's a common technique, everyone does this from time to time, but have you ever thought about what this might look like to a cop looking for his next bust? Yep, you guessed it. It's the same technique used to hold a cell phone up to your ear while talking and if a cop mistakes the two, it's your word against his. I also use my iPod a lot when I'm driving (yea, yea I know... but hey, it's not illegal yet!) and when I'm thumbing through for the next great song I bet it could appear that I'm texting. Yet another opportunity for a false ticket. I'm going to be really pissed the day I get pulled over and have this argument with a police officer. There's no winning in that situation. I'm reminded of a news story awhile back where a guy was sitting on a park bench eating a pear when several cops approached him with guns drawn because they thought the pear was a hand grenade. A hand grenade? Really? Yeah well, that civilian ended up with multiple gunshot wounds to the chest. Um, no bueno.

And as if the cops' stealthy ways aren't bad enough, now there are cameras perched high on poles at every intersection. These static eyes in the sky will catch criminals who do a slow roll through a traffic signal and send you a fine via the post office. Awesome. One of these boxes was recently installed at a major intersection that I drive through every morning on my way to work. And now, naturally, every single person who stops at this light refuses to turn right on red (even though it's still perfectly legal to do so) for fear that the camera will mistakenly take their picture anyway. Terrific. Way to hinder the flow of traffic. Luckily I don't live in an overcrowded city where traffic jams are only a car honk away, but still, it's the principal behind the whole thing. Whatever happened to innocent until proven guilty? Or the fact that we're supposed to have the right to face our accuser? Our rights are being tossed out the window for budgetary concerns, and I don't like that very much. I could expand this to the Federal level and make this blog four times longer, but I won't do that.